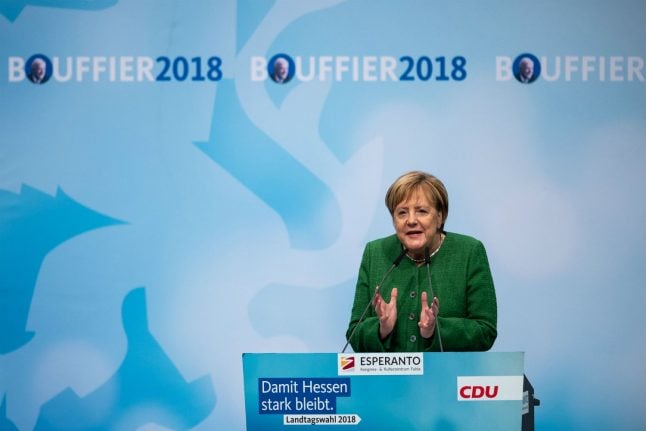 Merkel speaking at an election presentation in Hesse on October 25th. Photo: DPA

German Chancellor Angela Merkel faced a bitter political reality on Monday after the parties in her fragile coalition suffered heavy losses in a key regional election and a junior partner made threats to quit.

Sunday's blow for Merkel's conservative Christian Democratic Union (CDU)
and the Social Democrats (SPD) in Hesse was the latest state poll marred by
the image of the right-left “grand coalition” government limping from crisis
to crisis at a federal level.

“The situation for Merkel is grave,” daily Sueddeutsche Zeitung said late
Sunday. “Now the question is whether we'll soon have to write 'in liquidation'
after her coalition.”

Preliminary final results showed both of the formerly dominant parties
being hit with losses of around 11 percentage points in Hesse, western Germany, compared with the last election in 2013, although the CDU still claimed first place with 27 percent of the vote.

Meanwhile, the SPD tumbled to a tie for second place with the up-and-coming
ecologist Greens, each at 19.8 percent.

Showing political gains was the right-wing anti-immigrant party Alternative
for Germany (AfD) which took 13.1 percent of the vote to enter the Hesse state legislature for the first time.

That result would allow the current state government of CDU and Greens to continue, albeit with a thinner majority.

Merkel's first order of business when she speaks at 1pm in Berlin will be bucking up the Social Democrats, who have threatened to leave the federal coalition that many blame for years of disappointing electoral setbacks.

That would almost certainly trigger fresh elections and perhaps the end of
Merkel's political career.

“The state of the government is unacceptable,” SPD general secretary Andrea
Nahles said on Sunday, demanding from the CDU a “clear, binding roadmap for politics in the interest of the citizens”.

She was seeking to strike a sober contrast to the highly personal internal
quarrels of the conservative camp in recent months.

The ruling parties are like “two people drowning while chained to each
other,” political scientist Hans Vorländer of the University of Dresden told public broadcaster ARD.

Armed with Nahles's checklist, by September 2019 the SPD “will be able to
see whether this government is still the right place for us”, the party leader
said in an implicit threat to the chancellor.

After federal elections in September 2017 defined by sharp drops for both the centre-right and left and the appearance of the far-right in the Bundestag
(parliament) for the first time, the SPD agreed only reluctantly to back Merkel yet again.

Increasing numbers of SPD members are calling for the party to quit government immediately and lick its wounds in opposition, as it is presently
polling below AfD nationwide, at 15 percent to the far-right's 16 percent.

But Merkel also has to shore up support among her own party, where more and more members are calling her leadership into question.

Annegret Kramp-Karrenbauer – widely seen as the chancellor's anointed successor – spoke of a “very painful” night for the CDU in Hesse.

It was the second regional vote in quick succession to disappoint the conservative camp, after a battering in Bavaria two weeks ago.

Merkel's 13 years in power have piled up baggage from repeated compromise-laden “grand coalitions” with the SPD, as well as a fateful 2015
decision to keep Germany's borders open, ultimately allowing in more than one million migrants.

Although there are many months before the next regional poll, a vote
touching the chancellor more personally is slated for December, when she must stand for reelection as party chief”.

In Merkel's situation, clinging on would be a worse mistake” than giving
up the party presidency, conservative daily Frankfurter Allgemeine Zeitung
commented late Sunday.

“By passing the baton of her own free will she would show that she knows
the same thing everyone knows: the end of her chancellorship is approaching.”