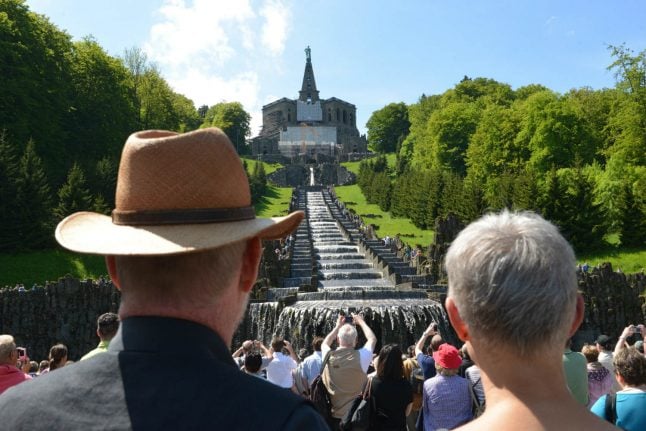 Visitors look up at one of the impressive fountains of the Bergpark in Kassel. Photo: DPA

Before coming to Germany for the first time over a decade ago, I’d already formed a movie-esque image of the country in my mind: a fairytale place of castles, cobble-stoned streets and tranquil parks.

Okay, a little unrealistic, and my initial visits to Berlin and Frankfurt caused me to broaden that picture quite significantly. But I returned to this idealism upon landing in Kassel, the largest city in northern Hesse nestled on the Fulda river with just over 200,000 residents.

I could understand how the Grimm Brothers, who lived here during the early 19th century, got their inspiration for their many children’s stories. Kassel carries charm at every corner, be it the now-UNESCO World Heritage listed Bergpark, a cute city centre, which was rebuilt following World War II, or the flat forest trails outside of the city perfect for an afternoon wander.

“The Kassel years were the happiest of our lives,” wrote Jakob Grimm in 1860, a sentiment shared by his brother Wilhelm. Between 1798 and 1841, the two spent more than thirty years in Kassel, where they wrote over 200 of their fairy tales.

To pay homage to the Brothers Grimm, Kassel recently opened a museum about them. Located atop a hill in the vast Staatspark, the Grimmwelt guides visitors through the lives of the literary masterminds, and includes original copies of several of their works such as the collection Children and Household Tales. Interactive exhibits explore how they came up with the ideas for now world famous tales such as Aschenputtel (Cinderella), Dornröschen (Sleeping Beauty) and Schneewittchen (Snow White). SEE ALSO: From shocking storytelling to diverse characters: How children's books in Germany are changing

Kassel’s most impressive feature is its Bergpark (Mountain Park), the largest park set on a hillside in Europe and the second largest in the world. Construction of the 2.4 square kilometre park began in 1696 and took a full 150 years.

I could clearly see the effort put into this sprawling work of art, which more humbly describes itself as a park. Built in a Baroque style, a huge Hercules monument sits at the tip of the hilltop. Cascades called the Wasserspiele then trickle down the hill to a palace, culminating at a fancy fountain – where amazingly water spouts 50 metres into the air without the aid of pumps – and the Neoclassical palace Schloss Wilhelmshöhe.

Originally used as a monastery in the 12th century, the Schloss now hosts the Gemäldegalerie Alte Meister, which true to its name includes a collection from many “old masters” such as Rembrandt and Poussin.

Kassel is also known for being a source of inspiration for modern-day artists. It’s home to the world-famous Documenta, a giant 100-day long exhibition of art which takes place every five years in Kassel (mark your calendars for September 2022).

It was founded by artist and teacher Arnold Bode as part of the 1955 Federal Horticultural Show, and was part of a push to bring Germany up to speed with the modern art which had been repressed and censored during the Nazi era. The first Documenta featured artists considered to have an unyielding affect on modern art, such as Picasso and Kandinsky. Not German enough to plan two years in advance? Some impressive exhibits from previous Documentas dot the cityscape, such as the 7,000 Oaks project by Joseph Beuys which saw many of the trees planted throughout Kassel or Claes Oldenburg's “Giant pickaxe” sculpture.

And whenever you go, there are a handful of modern art museums and the more morbid Museum für Sepulkralkultur, a collection devoted to the culture and history of death and dying. A haunting tree is situated in front of the exhibition, which tackles an important topic that we don’t usually see approached so candidly in popular culture.

I spent the last part of my day is Kassel in the rebuilt city centre, filled with many small bakeries visited by a slew of summertime hornets, and more modern chains and banks.

Walking down the main street, I reached the Karlsaue, an 18th century French-style landscape garden which also contains man-made lakes and fountains. The Orangerie, built by Landgrave William IV as a summer house in the early 18th century, was transformed into the astronomy and physical cabinet with planetarium after it was badly damaged in World War II.

I staked a spot on a park bench overlooking the Fulda river as people drifted by. This was idyllic Kassel at its best; and somehow scarcely changed throughout the ages.