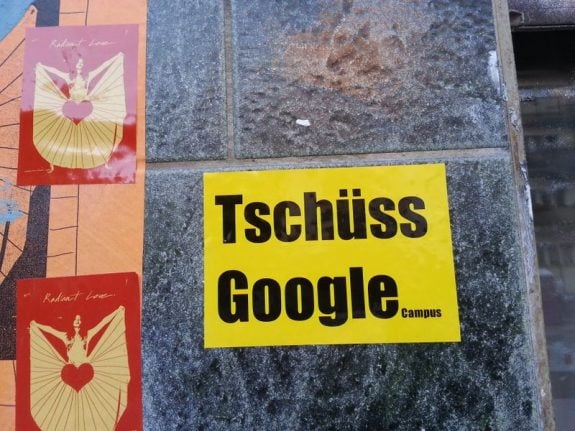 It’s the site where Google had proposed to open one of its Campus startup hubs, but abandoned the plans, announcing this week that the space would go to two social organizations instead.

“The decision is very positive,” beams Achim Koppitsch, who runs the Heisse Scheiben record store on Ohlauer Straße, across from the Umspannwerk.

He's one of the locals who feared having Google in the ‘Kiez’ or neighbourhood would mean more gentrification and rising rents.

With vinyls and CDs lined up neatly at the doorway, and second hand record players, some with ‘reserved’ slips written on a card and stuck to them, Koppitsch’s shop somehow resembles the pushback to a modern technology giant like Google.

“It (having Google in the Umspannwerk) would have pushed up commercial and private rents,” says Koppitsch from behind the counter.

“There is an upper limit on private rents, there are regulations,” he explains. “But there are no regulations on commercial rents, they can be raised without restrictions.”

Born in the south of Germany but a long time Berlin resident, Koppitsch, 60, has lived in an apartment near his shop for 14 years, and operated the store for the same amount of time.

“The commercial rent in my shop has almost doubled within these 14 years for me,” he says.

“That’s a problem. One day it will become so expensive that only cafes will be able to pay such high rents.”

First announced in November 2016, the company intended to transform part of the Umspannwerk into a Campus, where start-ups could go through a mentoring program led by the firm.

It would have been its seventh after London, Tel Aviv, Seoul, Madrid, São Paulo, and Warsaw.

But, in a turnaround, the company said the site would now go to online donation platform Betterplace and the KARUNA association, which supports children and young people in need.

Back in Kreuzberg, two men with their hoods up are smoking a joint on the balcony of the Umspannwerk, which is already home to organizations, including Red Bull music studios. Across the road, Ute is cleaning vases in her flower shop Wandelrose. She has an anti-Google poster on the window of the door which leads to a wonderland of plants and flowers.

Echoing Koppitsch, she says: “It was a good decision. It’s better if social things come to Kreuzberg and that no more residents get pushed out (because of rents).”

Ute, who also lives on Ohlauer Straße, says it’s clear “what will change if Google is over there”.

“There are some well known examples of what happens if Google appears somewhere,” she says.

“Here it’s already changed a lot. And in this case there would be even more extreme changes – people get pushed out.”

Kreuzberg has changed in recent years, along with other parts of Berlin that were formerly populated by squat houses and low rents.

It’s evident in the the number of hipster-style cafes or vegan restaurants, and the amount of people who have moved to the area from outside the city, resulting in landlords or real estate companies forcing up rents.

In the past decade, the average rent on new leases in Berlin has increased by 75 percent, according to recent figures.

Yet there is still something about Kreuzberg that refuses to conform. It’s not shiny, people still leave sofas or other old furniture on the street to be picked up and re-used.

Gentrification is happening but, arguably, in a different way to elsewhere and there is resistance, meaning it could be a slower process.

Aside from Google, demonstrations are held almost weekly against the ‘Mietwahnsinn’ – rent madness or insanity.

Locals are feeling the changes. Pauline, 32, who has lived in Kreuzberg near Görlitzer Bahnhof for four years, says the effect of the Campus might already be in force.

“Gentrification appears to have accelerated immediately across from what was the potential Google Campus, with the closure of a long established chemist and a thrift shop,” she says.

But Pauline says the “death knell for Kreuzberg as we know it” came long before the Campus saga, which “would have accelerated gentrification not caused it”.

She blamed the escalation of rents on holiday let platforms like Airbnb “which has taken a significant amount of residential properties out of the market”.

For the protesters who spent months demonstrating against Google, the campaign was about taking a stand against companies swooping in and causing living costs to shoot up. It was also, for some, about what Google as a company stands for. For all of them, Google’s U-turn is a success.

“It’s a victory because by all accounts Google backed down,” says Larry Pageblank in a café on the border of Kreuzberg and Neukölln.  “I think we should own it (the success) and be proud of it and keep it in mind for the next steps to come.”

Pageblank, whose alias is a nod to Larry Page, founder of Google, is one of the local residents who got involved with the campaign. The protest group is a mix of groups and individuals, from tech activists to community organizations.

SEE ALSO: Google is coming to Berlin Kreuzberg and locals are far from happy. Here's why

When he joined a meeting last year he was bowled over by the “super impressive and diverse mix of people” who were already mobilized to fight.

Pageblank describes the resistance as a “long lasting structure of a diverse network of people” that managed to hold down a giant.

“In six cities in the world with Google Campus no protest ever emerged,” he adds. “There was one opposition to the project and it was Berlin in Kreuzberg.”

The self-identifying computer hacker thought he could add his area of expertise to the mix. With the help of other members of the group and friends, they made a website to collate all the information together.

“We thought in addition to gentrification we’ll talk about all the other topics that Google represents to us, and write in English as well as German,” he explains, referencing mass surveillance, censorship, tax evasion and robotics as topics of concern.

Fuck Off Google was born.

Pageblank says the most important thing to take from the campaign is that it was a grassroots project that happened in real life.

“I’m very proud of our website, but most of it happened on the streets and I think that’s the very fundamental nature of what’s happened here,” he says.

How did they do it?

The group analyzed the situation to reach an understanding of what was happening with Google in Kreuzberg and beyond, looking at the company's relations with technology, its ethical values and how it operates.

“We dared to dig deep into this complexity,” he says.  Then there was a varied range of tactics, from “some graffiti on the street”, to undeclared noise demos to official protests. They produced stickers, posters and even produced a German language newspaper called Shitstorm.

They met regularly and took their time to understand and share information. Not everyone had the same political views or backgrounds – and that was okay.

And they had clear goals: “We didn’t want the arrival of unrestricted capitalists speculating on our livelihoods and Silicon Valley’s copy and paste culture on our neighbourhood,” says Pageblank.

“We want shared human values and use of technology that is respectful for people's’ rights instead of capitalizing on them.”

What the Kreuzberg group achieved was through a “local human structure”, he says.

Pageblank says the group doesn’t have an objection to start-ups who empower people and “do free software”, something he campaigns for.

Like Ute in the flower shop, what’s happened with Google elsewhere has been on the minds’ of locals.

Pageblank says many people from San Francisco – which commentators argue has been damaged by the technology industry’s success and contributed to a housing crisis  – joined the meetings and protests.

“The life, energy and culture and soul got sucked out of San Francisco with rent increases.

“It lost the space for freedom and creativity.”

What’s so special about Kreuzberg?

Although he acknowledges he’s not a long time resident, Pageblank, who has lived in Berlin two and a half years but known the city much longer, says Kreuzberg is a “bedrock of alternative cultures and experimentation for people outside the expected norms”. “It’s the culture of using spaces between spaces, making a lot, upcycling,” he adds.

However, he says, it’s true that Kreuzberg has been gentrified “and a lot of places have already disappeared”, with more under threat.

“It’s not one rent here or two rents that increase, it’s a systemic problem,” he adds, pointing to the practice of firms buying up buildings or properties.“

Google says their turnaround came from 18 months of speaking to locals and organizations, and they decided, along with Betterplace and KARUNA, to commit the space to social projects.

Ralf Bremer, Google spokesman for Germany, told The Local the firm does “not allow that unconstructive protests dictate our actions”.

“There are many people in Kreuzberg, who discussed with us, worked with us and shared their ideas with us,” he said.

“Those are the people who have contributed to the creation of this new house for social engagement (at Umspannwerk), and we are grateful for their support.”

Bremer added that as Berlin residents themselves, they understood the concerns of gentrification “but that is an issue that we certainly cannot solve as an individual company”.

There are “no plans” for another Campus in Berlin, he added, but Google for Startups will continue working in the capital.

He said the firm won’t move into the Umspannwerk and that Google was confident that “this house for social engagement will be something for the longer term”.

Meanwhile, some local politicians are disappointed by the decision. Free Democrats (FDP) faction leader Sebastian Czaja said the move sends a message to future companies and investors not to come to Berlin “and certainly not to Kreuzberg”.

Christian Gräff, economic policy spokesman for the CDU parliamentary group, said it was a “severe setback” for business.

“Berlin's reputation has been badly damaged as a result,” he said.

With all this in mind, the Kiez community, or at least some members of it, still plan to monitor what happens next, looking at how the social organizations that move in are related to Google, keeping an eye on other investors coming into the neighbourhood and continuing their campaign efforts for more ethical technology.

Pageblank says they are already talking with other activist groups across the world who have seen their protests in action and want to share tactics.

Could this lead to a wider people's’ revolution against huge technology firms and investors?

“We want people to think: we can make this colossus tremble,” says Pageblank. “People can organize themselves whatever their context and background is.

“We always said: 'Kreuzberg first, then the world.' Now it's the world.”