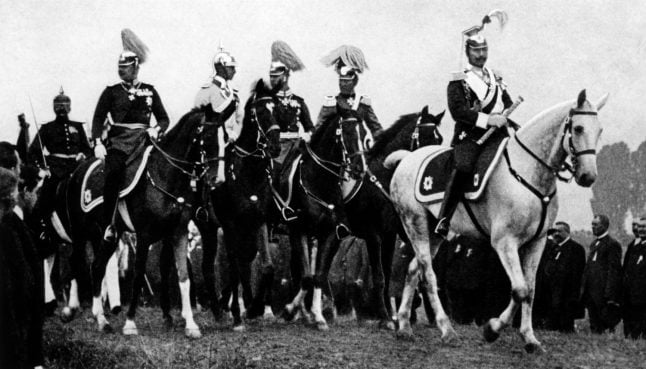 Kaiser Wilhelm II at the Imperial Parade in 1907. Wilhelm was the last ruler of the German empire which has once again become a topic of political discussion. Photo: DPA

The magazine Compact, which is close to the anti-immigration Alternative for Germany (AfD), is publishing a special November issue dedicated to the 1919 Treaty of Versailles which held the Reich responsible for the Great War and compelled the country to make colossal reparations.

The title recalls the rhetoric used in the 1920s by those nostalgic for Imperial Germany and the Nazis: “The shame of Versailles: how the victorious powers enslaved Germany”.

Its online story is headlined “Germany in chains”.

The aim is to reevaluate the German Empire (1871-1918) which for decades has been seen in the collective consciousness as the first of the destructive powers of the 20th century.

Hamburg University historian Fritz Fischer in the early 1960s confronted the German public with the then controversial thesis that Imperial Germany carried the sole responsibility for the war and the horrors of the Somme, Verdun and Gallipoli.

In his work “Griff nach der Weltmacht” (Bid for World Power), Fischer argued that the Germany of William II, dominated by a racist and imperialist elite, had deliberately instigated World War I in a bid to become a world power.

Fischer argued that Berlin used the crisis sparked by the assassination of Archduke Franz Ferdinand to go to war with France and Russia to create a German-dominated Europe and Africa – and that this unfulfilled ambition paved the way for the Nazi regime to follow.

This overturned the then entrenched national belief that Germany had fought a defensive war.

Joern Leonhard of Freiburg University said Fischer's views — at heart a “virulent criticism of the German Empire, militarism and imperialism” — are “still broadly shared today by the left”.

By contrast, the AfD wants to “glorify the Empire” as a state that “was modern, had strong industrial development and was very conservative”, said historian Klaus-Peter Sick.

Representatives of the extreme right in their speeches praise the former Imperial Chancellor Otto von Bismarck (1815-1898) and the era of “Prussian Palaces”.

Sick said that “the values of the German Reich correspond” to those of the AFD, “discipline and order”.

AfD leader Alexander Gauland went so far as to describe the Hitler regime as a “mere speck of bird shit” relative to “1,000 years of glorious German history”.

Sick said that the goal of the far-right, at a time when the last eye-witnesses are disappearing, is to ensure “that the Germans are proud of their history and the German nation and stop seeing the spectre of Nazism everywhere”.

Public interest in the origins of the First World War was revived with the 2013 release of the bestseller “The Sleepwalkers: How Europe went to war in 1914” by Australian historian Christopher Clark of Cambridge University.

Rather than just blame Germany and the Austro-Hungarian empire, Clark argues that other European powers shared an imperialist paranoia and, without intending to, sleepwalked into the first industrial-scale war.

The success of the book among German readers “betrayed a deep-rooted need to free themselves from blame and guilt,” said the conservative daily Frankfurter Allgemeine Zeitung.

The AfD's Bavaria chapter has promoted Clark's tome on its website.

While Germany has gone to great lengths to remember and atone for World War II, Nazi atrocities and the Holocaust, remembrance of the First World War is far more low-key.

Even in this centenary year, commemorations remain minimal. The foreign ministry hosted a conference entitled “Winning peace” in mid-October, but it was not open to the general public.

German Chancellor Angela Merkel will only participate in one ceremony, alongside French President Emmanuel Macron, on November 10 in Rethondes, the site of the signing of the Armistice.