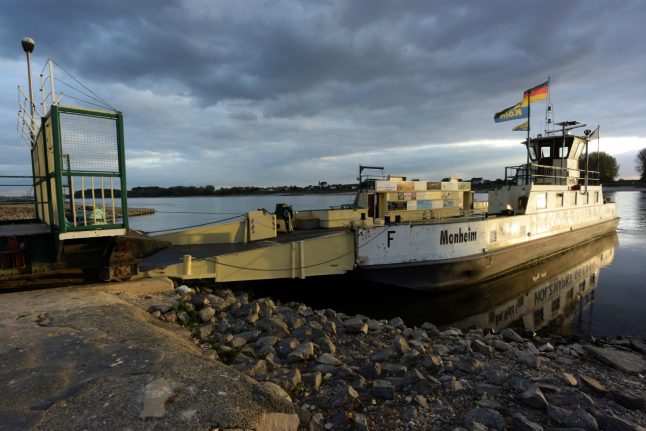 The ferry across the Rhine between Leverkusen-Hitdorf and Köln-Langel is moored on the right bank of the river. The ferry couldn't operate due to low water levels. Photo: DPA

Months of scarce rainfall and hot sunny weather drove water levels on the Rhine to a record low, forcing ship operators to suspend services to keep vessels from running aground.

“We haven't had any new ships in Cologne since last week — they stop in Duisburg” 80 kilometres north, Oliver Grossmann, head of shipping company CTS, told AFP.

He said that under normal conditions, “three or four” of his big vessels would stop each day in the city known for its Gothic cathedral.

The few barges still chugging along the river have had to drastically reduce their cargo to stay afloat.

Sitting in his office overlooking the mountain of containers, Grossman said rail links can only fill part of the gap as long as river transport is paralysed because of a lack of infrastructure and train engineers.

At the entrance to the port of Duisburg, a small tower houses a Rhine measuring station. On its roof are two LED panels reading 1.55 meters.

“This is the lowest level ever measured here,” said Jan Boehme, a hydrologist with the Water and Shipping Authority.

Torrid temperatures throughout  the summer and only rare rainfall have transformed Germany's waterways and created a crisis unseen since the start of record keeping in 1881.

The previous low water record set in Cologne in 2003 of 81 centimeters was shattered last Friday when the level dipped to just 77 centimeters, the water authorities said.

All along the Rhine, the situation looks similarly dire.

“Since July, the water levels have been lower than we normally see in this season,” Boehme said, noting that in October it usually fluctuates between three and four metres.

Although the link is not proven beyond a doubt, German authorities say the extreme dry weather matches the models of climate change drawn up by scientists.

The Rhine is hardly the only major waterway affected, with levels on the Elbe leading to Hamburg also dangerously low.

“This drought phase is exceptionally long,” Boehme said. “For water levels to rise again we would need a lot of rain – a little shower won't do it. We need extended, intense, widespread rainfall.”

The drying-up of large swathes of the Rhine marks a heavy blow to the German economy.

In 2017, 186 million tonnes of goods were transported between Basel in Switzerland and the German-Dutch border – amounting to around half of European river shipping, according to the Strasbourg-based Central Commission for Navigation on the Rhine.

But since the dry spell began, industrial giant Thyssenkrupp has had to cut back production at its Duisburg plant “because a sufficient supply of raw material cannot be assured”, a company spokesman said.

Chemicals giant BASF said it had “adapted” production due to “limited deliveries” to its Ludwigshafen factory, also on the Rhine.

Energy group RWE is struggling to supply its Hamm power plant with coal.

Meanwhile in Cologne, despite mild autumn weather, services on tourist boats and ferries has ground to a near standstill.

The sinking of water levels has dramatically altered a picturesque stretch of the German landscape, exposing all manner of wrecks and detritus on the banks and under bridges.

Abandoned and long-submerged bicycles have resurfaced by the hundreds.More threateningly, and as reported in The Local Germany, a 50-kilo World War II bomb emerged in the dried-out riverbed and had to be gingerly defused.