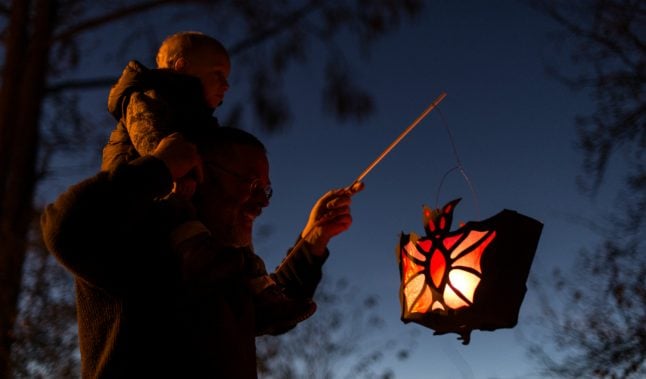 Valentino and his godfather at the St. Martin's Day parade in Freiburg in 2015. Photo: DPA

For more than 50 years,  musicians from all over the world have been coming to Berlin for the Jazzfest, one of the oldest and most prestigious jazz festivals in Europe. This year is no different; at the beginning of November the 55th JazzFest will light up venues across Germany's capital.

Nearly 200 musicians will take part in the festival which has an extensive programme, with events taking place throughout the city. Venues include the Haus der Berliner Festspiele and the Kaiser Wilhelm Memorial Church.

This year, all concerts at the Jazzfest will be broadcast via the ARD radio stations, so if you can’t make it to Berlin make sure to tune in. Otherwise, tickets are available now. On November 11th, up to 70,000 people will celebrate the opening of the new carnival season in Cologne. It's so important in the city that it's referred to as the ‘fifth season’, alongside spring, summer, autumn and winter, and the celebrations live up to this nickname.

Karneval officially begins at 11 minutes past 11am on the 11th day of the 11th month. It has its roots in the Middle Ages, as a celebration and excuse to sin one more time before the period of fasting for Lent begins. Although the main festivities featuring parades and colourful costumes don’t begin until just before Lent, the party officially kicks off in November.

Heumarkt in Cologne is the centre of celebrations, with music and dancing beginning at 9am and continuing into the early hours. The city completely shuts down, with roads closed and everybody out in fancy dress celebrating Cologne’s favourite season.

Karneval is also celebrated in the cities of Düsseldorf and Mainz. The iconic Hamburg DOM is the biggest public festival in Northern Germany, with roots going back to the 11th century. In wintertime, the old Mariendom cathedral was used as a shelter by merchants and entertainers and the tradition lasted until the cathedral was demolished in 1804.

In 1893 they finally found a new location: the Heiligengeistfeld event area in the St. Pauli district. Nowadays, the name of Hamburg's most famous fun fair is the only reminder of the old days in the cathedral.

Every year, several million people visit the Winterdom in Hamburg to socialize with Bratwurst and Glühweinand to get in the mood for Christmas and the Christmas markets. There are food stalls, fairground rides, and every friday evening there is a large fireworks display.

The Leonhardifahrt is a horseback procession that's traditional in Bavaria and western Austria. It takes place in honour of Saint Leonard of Limoges, the patron saint of farm animals.

On his feast day (November 6th) a pilgrimage takes place through Bad Tölz with beautifully decorated horse-drawn carriages and traditional dress. The route takes them up to St. Leonard’s Chapel, where the horses are blessed.

The aim of the procession is to visit churches consecrated by St. Leonard but celebrations continue into the evening with live music and dancing.

Other processions take place in honour of St. Leonard throughout Bavaria and Austria, but Bad Tölz’s is the largest and most important. It was included on the nationwide list of cultural heritage by the German UNESCO commission in December 2016.

The Short Film Festival Berlin is the second most significant international film festival in Berlin after the Berlinale and also the second oldest short film festival in Germany. Every November, it shows shorts from all over the world in the Hauptstadt.

Every year, more than 7,000 films are submitted, each up to 20 minutes in length. Approximately 500 works are featured in the festival’s programme and prizes are awarded in categories such as ‘international’, ‘German’, as well as ‘documentary’ and ‘children’s film’.

Films will be screened at various cinemas including the Volksbühne, Babylon, Eiszeit Kino, Passage Kinos (Neukölln) and Hackesche Höfe Kino; the programme is available here. The Würzburg Residenz, where the opening event of the festival will take place. Photo: DPA

The Würzburger Bachtage (Würzburg Bach Festival) was founded by the choirmaster Günter Jena and takes place every year in late autumn in the beautiful Bavarian city. It began with only four concerts, but has now become a festival with a full programme lasting 10 days. This year it celebrates its 50th anniversary.

Matthias Querbach will be leading the Würzburger Bachtage for the third time, after last year's success where many concerts were sold out. He describes a highlight of this year’s programme as Bach’s Mass in B Minor, which will be sung by the Würzburg Bach Choir and soloists. Querbach says: “There could be nothing more beautiful to celebrate our anniversary with.” We agree!

Although this festival is about celebrating the life and works of the German composer, it's not exclusively Bach. Music by Revel, Brahms, Beethoven, and others will also be performed as a part of the festival programme. The Rykestrasse Synagogue in Berlin, where the opening and closing events of the festival will take place. Photo: DPA

Celebrating Jewish culture in all its forms, the festival is taking place in Berlin for the 31st time. This year’s patron, Dr Klaus Lederer has described the festival as a “necessary signal of Jewish self-assertion,” but also a sign of the new Berlin, of cosmopolitanism and solidarity, cultural freedom and diversity.” He also emphasises the significance of this year’s festival, 80 years after Kristallnacht destroyed Jewish culture in Germany under the Nazis.

The week has a hugely diverse programme ranging from a New York a cappella group to a memorial concert and a reading of Heinrich Heine’s Deutschland: Ein Wintermärchen.

The Botanic Gardens in Berlin lit up for the Christmas Garden, 2017. Photo: DPA

The Botanic Gardens in Berlin have been lit up in Christmas lights for a few years, but now the Wilhelma in Stuttgart and the Pillnitz Palace and Park in Dresden will also get a touch of festivity.

If you just can’t wait for the Christmas markets to begin at the end of November, you can wrap up warm and head out to one of these beautiful spots for some Christmas magic. St. Martin's Day (Martinstag) is traditionally a Catholic holiday but is celebrated by children throughout Germany.  Children often make lanterns at school and then take part in a small lantern parade and celebration.

It is common to see children walking through their neighbourhoods in the evening with their lanterns, often singing songs and the parade ends with a bonfire. Sometimes the children even knock on doors and sing to receive sweets, similar to trick or treating at Halloween.

Martinstag was traditionally the ‘official’ start of winter and today it is the unofficial start of the Christmas shopping season in Germany. So when you see the children out with their lanterns you can head to the shops to begin shopping for some christmas goodies. Allerheiligen is a public holiday in some German states. Photo; DPA

“Allerheiligen,” or All Saints Day is a religious holiday for Catholics which takes place on November 1st every year. It’s not an official holiday in all of Germany but only in the states with a large Catholic population, such as Bavaria and Baden-Württemberg.

Many Germans will visit cemeteries to decorate the graves of deceased family members and friends with flowers or wreaths made of fir tree branches, pine cones and dried flowers. Candles are also lit, and children are traditionally gifted Allerheiligenstriezel (braided pastries) by their godparents.

All Saints Day is a so-called silent holiday in the German states mentioned. This means that no public dance events are allowed on this day and loud music is prohibited.