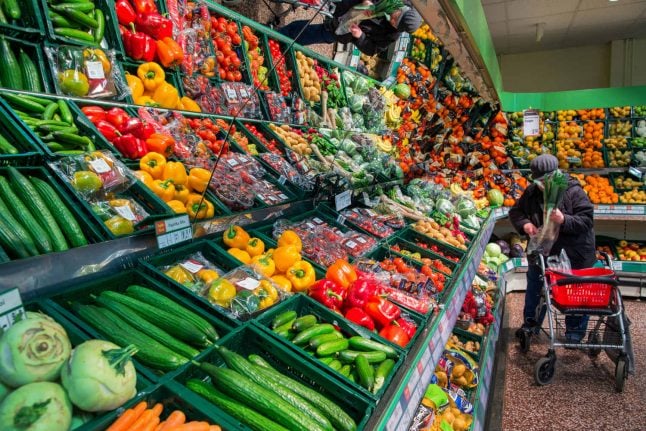 A woman and a selection of vegetables in Rewe, in Gadebusch (Mecklenburg-Vorpommern). Photo: DPA

Edeka is the largest German supermarket chain and has around 4,000 stores nationwide. It is similar to Rewe in its provision of a variety of produce such as fresh fruit and vegetables, baked goods, tins, jars and dairy products.

Larger stores often have cheese and meat counters, and you can also buy household items such as soap and loo roll, as well as cards and stationery. In some branches you might also find kitchen gadgets.

Edeka was founded in 1898 as the E.d.K., an abbreviation of the highly memorable Einkaufsgenossenschaft der Kolonialwarenhändler im Halleschen Torbezirk zu Berlin; it was rebranded phonetically as Edeka in 1913, perhaps so people could discuss where they were shopping more easily.

Rewe is one of Germany’s largest supermarket chains with around 3,300 stores in the country. It provides a range of good quality products, including most established German brands.

Rewe sells products from every food group, including fresh groceries, and bakery products, lots of high quality cold cuts, cheeses, tinned products as well as pots of olives and hummus.

In September, Rewe agreed to buy blemished fruit and vegetable products from its suppliers, in light of the drought which has recently affected German farmers.

So even if Rewe’s produce looks a little unappealing, it is likely to be good quality so don't let the way they look put you off.

Discount supermarkets such as Netto, Lidl, Aldi, Kaufland and Penny have a good provision of products at cheaper rates. The shelves tend to be stacked high with boxes, tins and bottles of all sorts from every food group.

The focus of these supermarkets tends to be on products that have a longer shelf life, such as boxes of cereal and tins of tomato or other vegetables at cheap rates, rather than organic cucumbers and high-end cuts of meat.

Many stores provide a range of household products as well, and some larger stores sell bigger items like microwaves and bins.

It’s worth bearing in mind that German checkouts tend to be quite hurried affairs, and this is especially true for discount supermarkets.

Expect to have to throw all your shopping back into your trolley while you're paying, and sort it into your bags in the packing area, rather than bagging up at the checkout.

Word of warning: the checkout staff won't be afraid to bark at you for being too slow and holding everyone up if you take too long to pack while paying.

The 'Biomarkt' or organic supermarkets

Germans are known for being environmentally conscious, which is a national characteristic expressed through the popularity of their organic supermarkets, including Denns Biomarkt and Alnatura.

Here you can buy foodstuffs such as organic spinach and blueberries, gluten-free pasta, almond-milk yoghurts and olive tapenades.

You will a notice that the prices are much higher in these shops, especially for fresh fruit and vegetable. But it does offer you the priceless sensation of knowing you’ve helped the environment (or, at least, not damaged it as badly as you might have done).

Technically not for doing grocery shopping but these stores also have some food products, such as cereal, dried fruit, tins – and even tofu. Some of Germany’s biggest Drogeriemärkte include Rossmann and DM.

At these stores you can also buy a variety of other things, ranging from hair products to laundry detergents. You can also pick up cosmetics, sweet sand wellbeing tablets, as well as gluten free food and stationery. Some stores also sell wine.

However, it's worth bearing in mind that in Germany you won't be able to purchase medication from these shops; if you want to get some paracetamol, for example, you’ll have to go to an Apotheke (pharmacy) and ask for it at the counter. The drug stores do sell vitamins and mild treatment products though, like plasters, bandages and antiseptic creams.

We want to know what your favourite supermarket in Germany is. Let us know by leaving a comment or emailing [email protected]