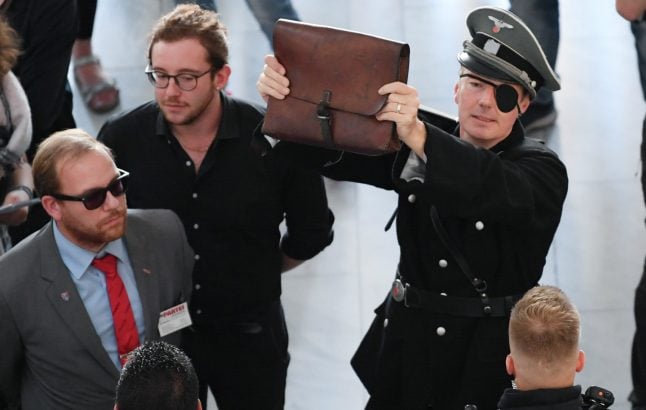 German politician and comedian Martin Sonneborn in his costume on Friday. Photo: DPA

German far-right politician Björn Höcke's appearance at the fair was predictably controversial. But standing out among the protesters was someone dressed as Colonel Claus Schenk Graf von Stauffenberg, the man who tried to assassinate Hitler with a briefcase bomb in 1944, and was played by Tom Cruise in “Valkyrie”.

German politician and comedian Martin Sonneborn, complete with eye patch, later confessed to the stunt. “Security wouldn't let me in,” he tweeted. “Was it the briefcase, I wonder?”

Harry Potter's magic fell short on Saturday when the fair failed in its attempt to break the world record for bringing together the largest number of people dressed as the boy wizard.

The bid, timed to celebrate 20 years of J.K. Rowling's Harry Potter books in German, needed at least 1,000 Potter lookalikes to succeed — but fell short by about a hundred.

In a small consolation to the fans, they did conjure up the largest ever such gathering in Germany. This year's host nation Georgia, fast becoming a travel hotspot, unveiled what its creators believe is the first guidebook entirely generated by tourists.

Using AI tools that scoured Facebook and Instagram for “the most emotional, most genuine” posts by visitors, the publishers of “Emotions are Georgia” ended up with over 40,000 to choose from. They then painstakingly contacted each poster to ask if their travel picture and caption could be in the book.

As well as celebrating Georgia's different micro-climates, adventure sports and ancient culture, the guide spotlights the small nation's 8,000-year-old tradition of making wine — of which plenty was served at the fair.

Spanish artist Moon Ribas can feel every earthquake happening on the planet thanks to two online sensors implanted in her feet, connected to seismographic data, that vibrate whenever there's a tremor.

Calling herself a “cyborg activist”, Ribas said the frequent vibrations took some getting used to, especially at night. “But now I feel like I have two beats: my heartbeat and the Earth's beat.”

Ribas lets the Earth's movements inspire her dance and drum performances — but if she is on stage and there are no quakes, there's no show.

US author Anna Todd, whose fan fiction on the Wattpadd website turned into a bestselling book series, cancelled her talk — set to be one of the biggest of the fair — after she was verbally abused by “a group of men” at her Frankfurt hotel.

Her publishers said she feared the same men might attend her event and she “no longer felt safe”.

Todd tweeted about the incident, which came during a year when the #MeToo movement was a dominant theme at the fair, saying the unidentified men “harassed us for hours” and shouted profanities at her.