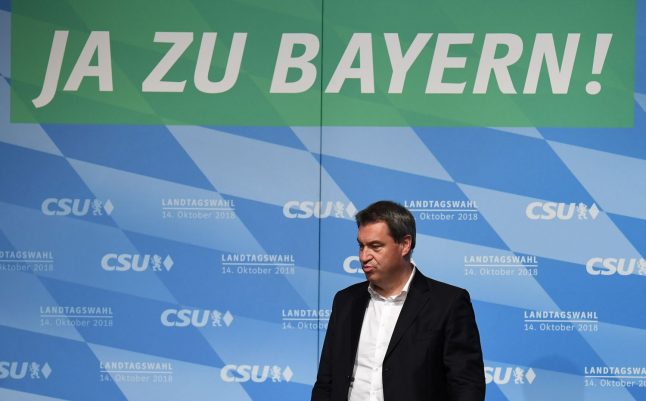 The Christian Social Union (CSU), who have almost single-handedly ruled the wealthy beer-and-lederhosen state since the 1960s, are expected to lose their absolute majority, polls say.

The other partner in Merkel's fragile 'grand coalition', the Social Democrats, are also set to do poorly while the far-right and anti-immigration AfD look certain to enter the state assembly.

The biggest winners, however, may be the left-leaning Greens who have doubled their poll ratings to around 18 percent since the last state elections, which would make them the second strongest party.

Poll booths open at 0600 GMT for almost 10 million eligible voters, and first projections are expected shortly after they close at 1600 GMT.

If the surveys prove correct, the Bavarian election will mark another step in the demise of 'big-tent' mainstream parties and the fragmentation of the political landscape, as seen in other western democracies.

For Merkel, now often labelled a lame duck leader in her fourth and final term, it would further raise political pressure two weeks ahead of another dangerous regional vote, in the central state of Hesse.

Parliamentary speaker Wolfgang Schaeuble, a veteran Merkel ally, has conceded that the two state polls will “affect national politics and thus the reputation of the chancellor”.

The CSU, the state's traditional sister party to Merkel's CDU, has long employed a folksy brand of beerhall politics to monopolise power in the state known for its fairytale castles, Oktoberfest, corporate champions like Siemens and BMW and the Bayern Munich football club.

It has preached economic stability and traditional conservative values in the mainly Catholic state, promoting crucifixes in school classrooms and bans on wearing Islamic veils in public.

As a consistent vote winner, the party from the best-in-class “free state” of Bavaria has confidently co-governed in Berlin with Merkel's CDU.

But the dynamic changed after mid-2015, when the region bordering Austria suddenly became Germany's frontline state for a mass influx of mostly Muslim refugees and migrants fleeing war and poverty, half of them from Syria, Iraq and Afghanistan.

After initial scenes of welcome, the influx sparked a xenophobic backlash that drove the nationwide rise of the AfD, which in last year's general elections took millions of votes to weaken all mainstream parties.

The CSU has also attacked Merkel's long liberal refugee with a ferocity that has grown as the Bavaria election neared, in an increasingly desperate attempt to recapture voters drifting to the AfD.

As the spat escalated, the CSU's Interior Minister Horst Seehofer has provoked rifts that drove her wobbly coalition to the brink of collapse.

Unusually, Merkel has been largely absent from the CSU election campaign, which in its final rally on Friday invited instead Austria's right-wing Chancellor Sebastian Kurz.

Greens on the rise

A series of dramatic polls have signalled that the CSU's hardline rhetoric and brinkmanship have backfired badly, as its ratings have plummeted into the low 30 percent range.

While the AfD has polled at or above 10 percent, the surprise stars have been the Greens, a one-time hippie and peacenik collective that has poached mainstream voters to suddenly mature into a mainstream political force.

While it unashamedly wants to save the planet, it has also vowed to address voters' day-to-day concerns from child care to urban housing.

As the CSU looks to many voters like yesterday's party, state premier Markus Soeder has toned down his shrill rhetoric about “asylum tourists” and blamed “Berlin politics” for the poor surveys, heightening speculation he is setting up his long-time rival Seehofer as the fall guy.

Seehofer, 69, has meanwhile declared he intends to “complete my mission” as interior minister, and presumably keep needling Merkel.

Ironically, one possible outcome of the Bavaria poll could be to force an improbable alliance between the conservatives and the Greens, which could set a precedent for future national governments.