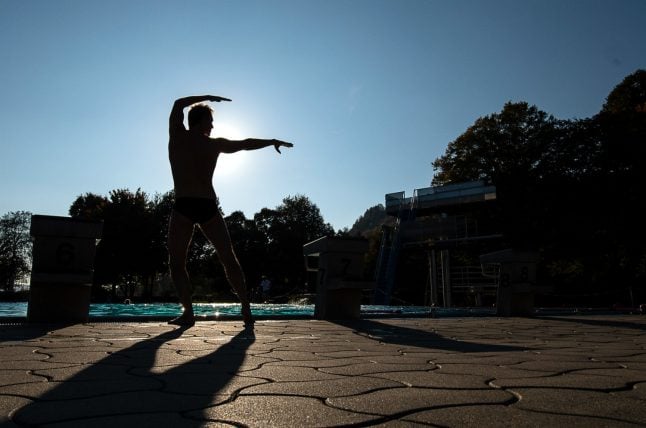 The Tübingen outdoor swimming pool in Baden-Württemberg is surprisingly still open. Photo: DPA
Temperatures could hit 25C in some parts of the country this week, but forecasters also warned that there was a risk of cloud and fog that could keep the mercury from rising.
If the fog clears, then temperatures will sore, helping to prolong that summery feel.
According to the German Weather Service (DWD), higher temperatures are more likely from mid-week onwards.
On Tuesday the temperature was expected to reach 19C in the north of the country, and 22C in parts of southern Germany.
On Wednesday the mercury is expected to creep up to highs of 24C – and on Thursday some parts of Germany may reach 25C.
According to DWD, the forecast is partly still uncertain because of the stubborn fog that is making mornings chilly.
SEE ALSO: World Cup fever to packed-out parks: Why Germany's scorching summer is one to remember
Meteorologist Markus Übel from DWD told DPA it was a “golden October with some exceptions as fog can last longer in some regions”.
According to Übel, there is no end in sight to the calm high-pressure weather this week “and probably even beyond,” he predicted.
There are also no signs currently of any changeable spells, rain or early winter weather, that is often the norm at this time of year, forecasters say.

The German Weather Service shows how the fog and cloud can stop the sun from shining through. The first camera shows Hamburg and the second Hohenpeißenberg in Bavaria, calling it 'weather injustice in autumn'.

The term 'golden October' refers to the autumnal leaf colouring in forests, especially during sunrise or sunset when the sun is yellowish-red in colour.
Meanwhile, the mild temperatures are even helping to prolong outdoor swimming season.
The Tübingen outdoor swimming pool in Baden-Württemberg is still open – and in the first week of October, more than 800 guests came daily, reports DPA.
“According to our records, the open-air swimming pool has never been open for longer,” said Johannes Fritsche, spokesman for the Tübingen municipal utility.
In the heat of 2003, the open-air swimming pool was open until October 2nd, but this year it's even longer.
Tübingen's open-air season usually ends in mid-September, yet now it's expected to remain open until Sunday at least.
At 7.30 a.m., when the Neckar valley is still under early fog, the first bathers arrive. In the first week of October there were between 200 and 900 eager swimmers a day.
The water is currently between 21C and 22C – about two degrees less than on hot summer days.
“The colder the nights, the more it cools down,” said Fritsche.
In order to fully concentrate the heat output of the pool on the 50-metre-long sports pool, the paddling and children's areas are closed.