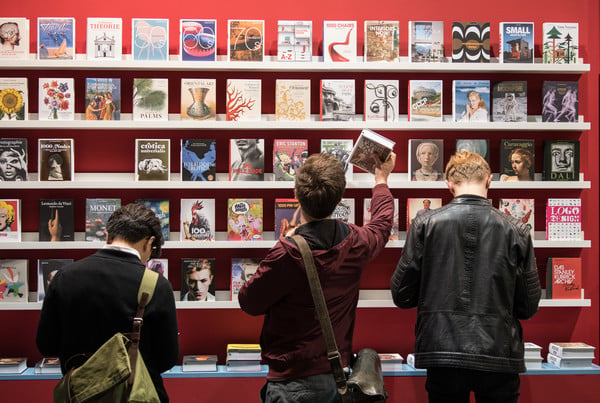 Photo: DPA
The outspoken stance comes a year after the last edition of the world's largest publishing event ended in scuffles and chants of “Nazis Out”, triggered by the presence of a far-right German publisher and its controversial speakers.
Organisers have defended the platform given to the Antaios house, notorious for anti-immigration and anti-Semitic publications, saying the book fair stood against censorship of any kind.
“We allow all opinions to be heard, whether we like them or not,” director Juergen Boos told a pre-fair news conference. “But we have opinions too. And we will make our points of view very clear.”
Against a backdrop of rising euroscepticism, the book fair will start by sending a distinctly pro-EU signal at Tuesday's opening ceremony, giving the stage to the bloc's foreign policy chief Federica Mogherini.
The following day, German President Frank-Walter Steinmeier will join a debate on how to combat anti-foreigner and populist voices “in stormy times”.
The fair has also teamed up with the United Nations and Amnesty International to celebrate the 70th anniversary of the UN human rights declaration, an achievement Boos said “cannot be taken for granted”.
Freedom of expression in Vladimir Putin's Russia, Turkey's media crackdown and concerns about the rule of law and free speech in Poland will all be topics of discussion.
Africa rising
Commentators will also take stock of the #MeToo movement, a year after it sparked a global discussion about sexual harassment, and renowned US authors Meg Wolitzer and Paul Beatty will talk feminism and race in the era of President Donald Trump.
READ ALSO: #MeToo in Europe: New laws on consent and catcalling
African authors are likewise getting a chance to shine with the continent preparing for its “biggest ever” presence at the fair, which organisers said reflected the African publishing industry's increasing professionalism and international reach.
Nigeria's Chimamanda Ngozi Adichie, author of “Americanah”, will discuss her smash-hit essay “We Should All Be Feminists”, while Trifonia Melibea Obono will present her coming-of-age book “La Bastarda”, the first ever novel by a woman from Equatorial Guinea translated into English.
And although the Antaios company is skipping this year's event, two other German far-right publishers will be manning stands at Frankfurt's giant conference centre. Several lawmakers from the country's anti-Islam, anti-immigration AfD party are also expected to show up, Boos said. But with 7,300 exhibitors from over 100 countries, he stressed that the far-right represented “a mini group” at the fair.
“They get a lot of attention. The question is whether they deserve it.”
Cyborgs and holograms
This year's event will once again showcase hi-tech novelties in a bid to encourage the book publishing industry to think creatively about how to plug into new technologies, including through augmented reality.
Valued at around $120 billion annually, the global book publishing industry has seen steady but slow growth in recent years, and sales of e-books have stagnated.
Hologram singer Maya Kodes will perform at the fair, as will Spanish “cyborg activist” Moon Ribas who has implanted a sensor in her body that vibrates whenever there's an earthquake.
Host nation Georgia meanwhile will bring not just dozens of authors to Frankfurt but also a 1.8-million-year-old skull from the country's famed Dmanisi cave, home to the earliest human fossils discovered outside Africa.
The Frankfurt book fair itself dates back to the Middle Ages, with the first edition taking place shortly after the Gutenberg printing press was invented in nearby Mainz.