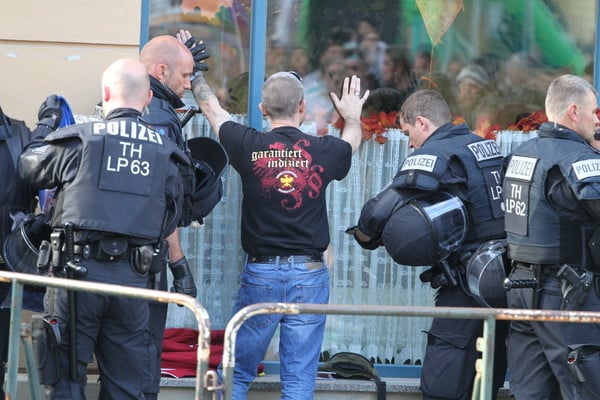 Police officers arrest a concertgoer on Saturday night. Photo: DPA
The violence prompted police to halt the gig, held under the slogan “Rock against the overflow of foreigners”, which had attracted almost 800 people at the town of Apolda in the former communist state of Thuringia.
Several concert-goers sought to force through a police cordon at Apolda, throwing projectiles at officers who retaliated with pepper spray, according to a statement issued by authorities on Sunday. None of the injured officers were seriously hurt.
Police also recorded a series of offences during the event including 22 instances of the use of banned Nazi insignia.
Around 500 counter-protesters also marched against the far-right concert.
Germany has been deeply polarised by the arrival of more than a million asylum seekers since 2015. Capitalising on the souring mood among some against new arrivals, far-right and ultra-nationalist groups have seen a revival while the anti-immigration Alternative for Germany (AfD) has also entered parliament.
Thuringia has emerged in recent years as a key site hosting far-right or neo-Nazi rock concerts, with 59 held in 2017, up from 54 in 2016, regional broadcaster MDR reported.
The concert was due to be held at another small town in the state, but authorities blocked the event, forcing its last-minute move to Apolda.