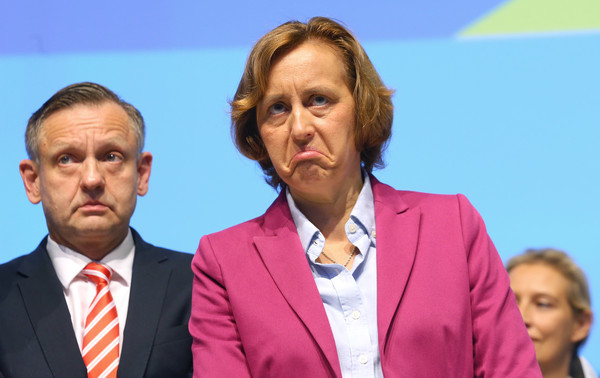 AfD's deputy parliamentary group leader Beatrix von Storch dismissed concerns by the Central Council of Jews, calling it "part of the establishment." Photo: DPA
The party has scheduled an announcement later Sunday on what it calls a new Jewish grouping within its ranks. Few other details have emerged.
Leading members of the AfD have come under fire repeatedly for comments that appear to play down the Holocaust. Party co-leader Alexander Gauland in June described the Nazi period as a mere “speck of bird shit in over 1,000 years of successful German history”. Another leading AfD politician, Björn Höcke, has criticised the sprawling Holocaust memorial in Berlin, branding it a “monument of shame”.
Ahead of Sunday's launch, Jewish organisations including the Central Council of Jews in Germany issued a statement describing the AfD as “a racist and anti-Semitic party”.
“The AfD is a party that provides a home for hatred for Jews as well as the relativising, or even denial of the Holocaust,” it said.
The AfD's deputy parliamentary group leader Beatrix von Storch hit back in an interview published Sunday by broadsheet Welt am Sonntag.
Taking aim at the Central Council of Jews, von Storch compared it to “official churches”, which she dismissed as “part of the establishment.”
The AfD positions itself as a group offering voters an “alternative” to mainstream established parties. Capitalising on discontent over an influx of asylum seekers in 2015-2016, the AfD is now the biggest opposition party in Germany with over 90 seats in parliament.
The deputy parliamentary group leader of Chancellor Angela Merkel's CDU party, Stephan Harbarth, called the AfD's bid to start a Jewish wing “hypocrisy”.
“Whoever calls the Holocaust a speck of bird poo in German history does not fight anti-Semitism, but mocks its victims, and definitely does not stand on the side of the Jews,” Harbarth told Sunday's edition of daily Bild.