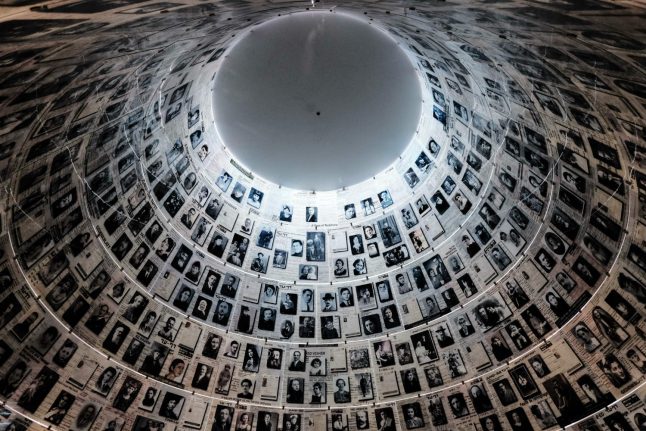 The Hall of Names, where the stories of more than four million victims of the Holocaust are listed, in theYad Vashem in Jerusalem. Photo: DPA

Merkel visited the Yad Vashem memorial in Jerusalem after arriving on Wednesday night along with members of her cabinet for a one-day visit.

“Nearly 80 years ago, on the pogrom night of November 9th, the Jewish people in Germany faced unprecedented hate and violence,” she said after her visit, reading out the message she wrote in the memorial's guest book.

Merkel was referring to the Night of Broken Glass (Kristallnacht) pogroms on November 9th, 1938.

“But what followed were the unprecedented crimes of the Shoah and its break with civilisation,” Merkel added.

“From this comes the everlasting responsibility of Germany to remember this crime and to oppose anti-Semitism, xenophobia, hatred and violence.”

SEE ALSO: Are refugees to blame for a rise in anti-Semitism or are they being scapegoated?

The visit by Merkel and members of her cabinet comes as part of German-Israeli government consultations held regularly.

Fears of a resurgence in anti-Semitism in Germany are expected to be discussed in the joint government meeting on Thursday afternoon.

Merkel and Israeli Prime Minister Benjamin Netanyahu will set aside their list of differences for the talks to showcase cooperation between their two countries.

Netanyahu has harshly criticised European countries over Iran, Israel's main enemy, and their efforts to keep alive the nuclear deal with Tehran.

Germany and other European countries have repeatedly hit out at Israeli settlement building in the occupied West Bank and warned over threats to remaining prospects for a two-state solution to the conflict with the Palestinians.