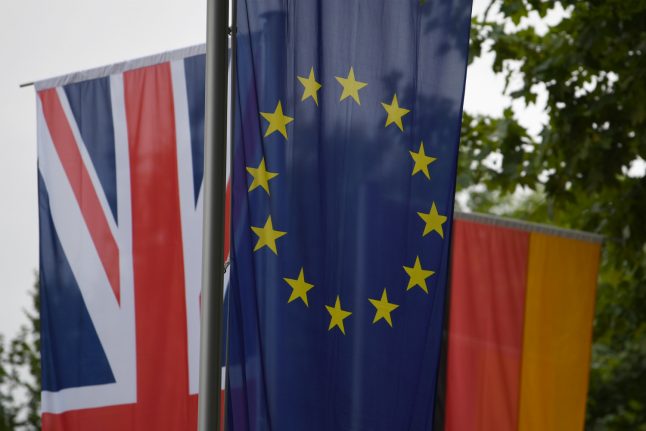 How do you think British-German relations have evolved since you became the British Ambassador to Germany in 2015?

Without a doubt, the Brexit referendum result of 2016 was a shock and disappointment to many Germans. But life goes on. Trade between us has continued to grow. British and German people continue to visit each other’s countries, for work, study and tourism. Negotiations on Brexit are very challenging.  But what unites us remains far more important than what divides us.

Today, even as we negotiate with the EU in Brussels, the UK and Germany stand together on every major international issue which confronts us – from global trade, to the nuclear deal with Iran, to climate change. And that won’t change. Why should it? The British and EU flag being flown in Berlin. Photo: DPA

We have a relationship and shared history which goes back 1500 years. We have a shared culture. We continue to share the same continent. Our security is indivisible. And there is much mutual respect and genuine affection between our two countries. I feel it every day here.

With the official Brexit date looming (March 29th, 2019), do you think British-German relations are at a turning point?

It will change. For example, our ministers and officials will no longer meet each other regularly in Brussels. So we will need more bilateral channels and mechanisms to compensate. The new economic relationship between us will depend on the new economic relationship with the EU. And designing that is hard.  It involves hammering out a new balance of rights and responsibilities.  Our negotiators are working hard at it.

But other areas are less politically challenging. In both Germany and the UK many argue, for example, that Brexit should not lead to reduced cooperation in science, education, security, defence or foreign policy. And they are right.

SEE ALSO: Brexit: What you'll need to do if there's a no-deal

Since your letter to The Local in July, have there been any developments to UK-EU Brexit negotiations?

Yes. Theresa May’s Chequers plan sets out our vision for a continued close relationship with the EU in all important areas. The Chequers plan was not easy to reach politically, but the British Government is now united behind it. The EU said that if the UK position developed, so could the EU’s. Well, Chequers was a big development in our position. We are waiting for a constructive EU response.

It is essential to design the relationship in a way which avoids the need for a hard border in Ireland – either between North and South, or between Northern Ireland and the rest of the UK. Chequers is the UK’s suggestion on how to do that. If the EU has a better suggestion, we need to hear it soon.

SEE ALSO: Brexit: Brits should try for Citizenship even if they don't think they qualify

What role does the British Embassy in Germany play in the negotiations?

The negotiations are a matter for the UK and EU Commission negotiating teams. My role and that of the Embassy and our two Consulates is to explain the UK’s position to Germany, and explain German policies and concerns to our colleagues in London.  And, of course, to keep promoting a strong bilateral relationship. What assurances can you give UK Nationals in Germany fearing a no-deal scenario where Britain exits the EU without a formal agreement?

It remains a very high priority for the British Government to ensure that citizens on both sides, EU citizens in the UK and British citizens elsewhere in the EU, can continue to live their lives as they have so far.

The UK Government does not want, nor does it expect, a no deal outcome from the negotiations.  But in the unlikely event that happens, I am very confident that the UK government will do the right thing by EU citizens.

Indeed, as the Prime Minister said in a statement recently: “There are over three million EU citizens living in the UK who will be understandably worried about what the outcome of yesterday’s [Salzburg] Summit means for their future.

“I want to be clear with you that even in the event of no deal, your rights will be protected.  You are our friends, our neighbours, our colleagues.  We want you to stay.”

In a no-deal scenario, what happened to UK citizens in EU countries would of course be a matter for host governments. But I would be surprised and disappointed if the German government did not take a similar approach, and do the right thing by British citizens who have made their lives here in Germany.

I appreciate that this is a difficult period of uncertainty for UK nationals living in Germany. We are committed to ensuring relevant information is available in a timely, transparent and accessible way and will continue to share information on our website and our social media channels, as and when it becomes available.

How will your job representing the UK in Germany change once Britain is no longer in the EU?

I will no longer attend EU Ambassadors’ lunches!  But otherwise, I don’t think my job will change that much.  I will be busy talking to politicians, journalists and businesspeople around the country.

I will have to lead a larger team. One of the consequences of Brexit is that we are getting ready to intensify our bilateral exchanges, to make up for the loss of contact in EU meetings. By the end of this year I will have 50% more British diplomats here in Germany than there were in 2015 when I arrived.

Do you have a Brexit story or views you want us to include in The Local? Get in touch with us by emailing [email protected]