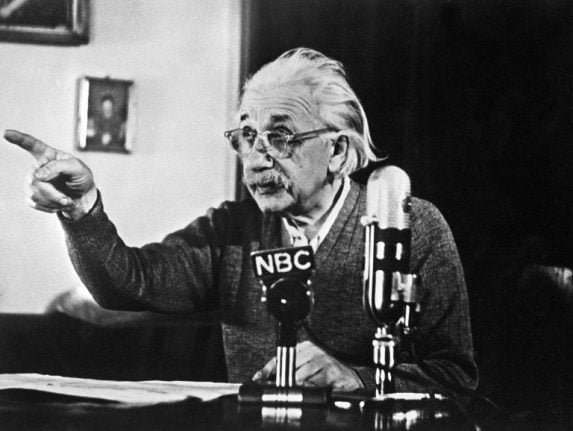 Written a year before the legendary physicist died in 1955, his name synonymous with genius, Einstein writes in German from Princeton, New Jersey to German philosopher Eric Gutkind.

“The word God is for me nothing but the expression and product of human weaknesses, the Bible a collection of venerable but still rather primitive legends,” writes the physicist, best known for his theory of relativity.

“No interpretation, no matter how subtle, can (for me) change anything about this.”

The one-and-a-half-page letter will go on sale on December 4th, estimated by Christie's to fetch between $1 million and $1.5 million.

The letter was previously offered at auction in 2008, bought by a private collector for $404,000, Christie's said.

“It is one of the definitive statements in the religion vs science debate,” says Peter Klarnet, senior specialist in books and manuscripts at the auction house.

The son of secular Ashkenazi Jews and forced to flee Germany after Adolf Hitler took power, Einstein did not exclude Judaism from his critique.

“For me the unadulterated Jewish religion is, like all other religions, an incarnation of primitive superstition,” he writes to Gutkind.

“And the Jewish people to whom I gladly belong, and in whose mentality I feel profoundly anchored, still for me does not have any different kind of dignity from all other peoples.

“As far as my experience goes, they are in fact no better than other human groups, even if they are protected from the worst excesses by a lack of power. Otherwise I cannot perceive anything 'chosen' about them.”

Last October, a note that Einstein had given a courier in Tokyo briefly describing his theory on happy living sold at auction in Jerusalem for $1.56 million, Winner's auction house said.

“While Einstein letters and manuscripts appear with some frequency at auction, those of great importance and significance do not,” said Klarnet.

“In the broadest sense, it is similar to Einstein's 1939 letter to (US president) F.D.R. warning of German efforts to build the bomb that we sold for $2 million in 2002,” he added.

The letter, already been shown in Shanghai, goes on public view in New York from November 30 to December 3, Christie's said.

READ ALSO: 9 of the most profound things ever said in German