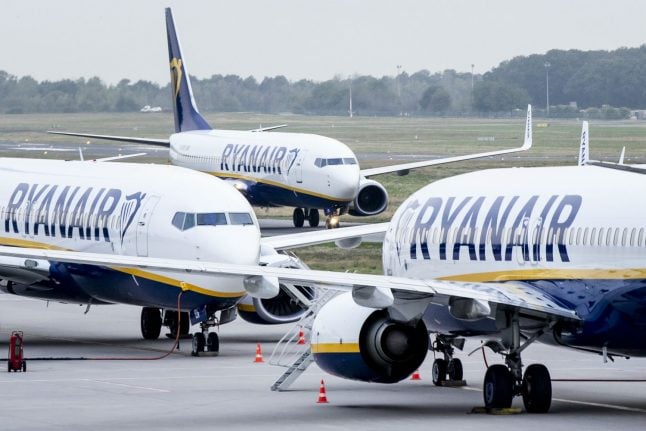 Ryanair planes during a strike in North Rhine-Westphalia in September. Photo: DPA
Ryanair had announced on Thursday that less than 100 flights had to be cancelled due to the strike participation of the German crews, yet the German trade unions Verdi considered this estimate be too low.
According to a current evaluation from Airliners.de, a total of 26 departures were cancelled in Berlin-Schönefeld, 10 in Frankfurt, 9 in Weeze and 8 in Hamburg.
No flight cancellations were registered for Memmingen, Munich, Nuremberg, Stuttgart and Baden-Baden.
In addition, there are cancelled flights from abroad to German destinations, as other European countries are also on strike. The numbers could increase over the course of the day.
'No satisfactory offer'

The crews' union Verdi said Thursday that after another four rounds of negotiations with the airline, “Ryanair did not submit a satisfactory offer”.

Travellers in Spain, Belgium, the Netherlands, Portugal and Italy will also be affected by Ryanair walkouts.

Germany's Cockpit union (VC) had already said late Wednesday that its pilots would stage a strike in the protracted dispute.

The Dublin-based carrier warned on Tuesday that 190 flights would be cancelled, affecting 30,000 passengers, before revising the figure downward a day later to 150 flights.

After German staff announced they were joining the strike action, Ryanair  increased the number again.

“We have pre-cancelled some more flights (under 100) tomorrow (Friday the 28th) due to a short notice strike, called by the VC union in Germany,” it tweeted.

Ryanair said the vast majority of its 2,400 normally scheduled flights would be unaffected by “these unnecessary strikes”.

All affected customers have received email and text message notifications to advise them of cancellations and options, Ryanair said.

It came after pilots and cabin crew staged a walkout on September 12th, when 150 flights to and from Germany were cancelled. Staff staged protests at German airports during the industrial action.

Workers have been seeking higher wages and an end to the practice whereby many have been working as independent contractors without the benefits of staff employees.

Another key complaint of workers based in countries other than Ireland is the fact that Ryanair has been employing them under Irish legislation.

Staff claim this creates huge insecurity for them, blocking their access to state benefits in their country.