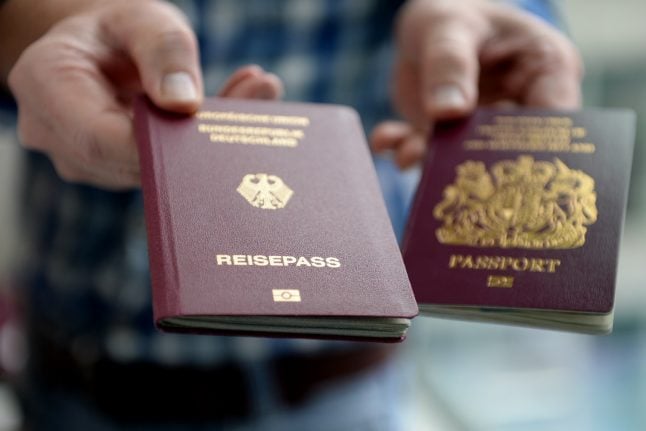 Would you swap your passport for a German one? Photo: DPA

Business owner Rob Harrison of the group British in Germany warned people that the option to get dual British/German citizenship may expire on the UK's expected EU leaving date of March 29th next year, in the event of a no-deal Brexit.

After that, Britons wishing to become German would likely have to give up their British passports.

Harrison, who works with the British in Germany campaign group in Bavaria, told The Local he felt relieved after securing dual citizenship two months ago.

The 57-year-old, who is originally from England but has lived in Germany since 1990, settled in a town near Munich with his wife and two children.

“We've been exchanging a lot of information on how to become a German citizen, what the requirements are and encouraging people to take up this option,” he said.

The law states that to gain citizenship you must have lived in Germany for at least eight years (or six years in special circumstances), your language skills must be at a certain level, you have to pass a citizenship test and have no criminal record, among other things.

In August the German Foreign Ministry confirmed that it would introduce measures to extend the deadline for British nationals to apply for dual nationality during a transition period until December 31st, 2020.

But the law would only come into place in the event that the UK and EU reach a deal before the March deadline, an outcome which is not guaranteed.

SEE ALSO: Brexit planning, what you'll need to do if there's no deal

In the event of a no-deal Brexit, the law would not apply and Brits would no longer be able to keep their British citizenship if their German passport is granted after the deadline.

With such uncertainty, campaigners have advised Brits to get in touch with their local authorities.

“Talk to your Foreigners' Registration Office (Ausländerbehörde) and review your options,” says Harrison. “Don’t look at the law and think you won’t be qualified, just go and talk to them about your situation.”

Harrison said most staff have been very “forthcoming” and accommodating to Britons.

“There is a certain amount of freedom, they can make exceptions. They’ve certainly been treating it quite favourably.”

In Munich an extra member of staff has been employed to handle all UK citizenship applications, Harrison said.

'See if you can get permission'

So when should someone with a British passport who wants to become German apply?

“If someone has been here three months they’re obviously not going to get it,” said Harrison.

“But if they’ve been here six or even five years, especially if they're married or in a long term relationship, they should try and get all their documentation in place as quickly as possible because we really have no idea how things are going to pan out.

“I would go for it and just see if you can get permission.”

SEE ALSO: Quiz: Can you pass these German citizenship questions?

Last year a record number of Britons – 7,493 – took up German citizenship, which authorities attributed to the effect of the UK voting to leave the EU.

Harrison said there was “concern” but not panic among Brits he’s spoken to regarding Brexit.

The British in Germany group has also been advising people on other matters concerning Britons ahead of the UK’s departure from the EU, including exchanging your driving licence for a German one, keeping an eye on mobile roaming charges and looking into how Brexit will affect pensions, social security and care.

The group holds regular 'Infoabends', as well as themed discussions, and offers an advice service for British people in the Federal Republic.

Harrison also said the uncertainty is causing trauma the other way round too, with  many Germans living in the UK making life changing decisions because of Brexit.

“There is a movement of Germans coming back from the United Kingdom to Germany, some of them very unhappy.”

Do you have a Brexit story you want to share? Have you been refused German citizenship, or are you in the process of applying? Have you come back to Germany from the UK because of Brexit? Let us know by emailing [email protected]