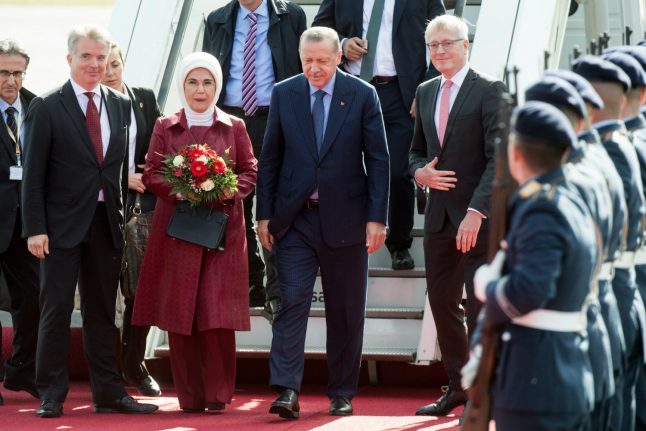 Security was tight in Berlin ahead of the visit. Press freedom protestors from the group Reporters Without Borders demonstrated outside Tegel airport where Erdogan landed.

As a red carpet was laid out at his plane, a vehicle with the sign: 'Mr Erdogan lands in Berlin, journalists land in prison', was stationed outside the airport.

The activists wanted “to make it clear on arrival that we are not looking the other way,” said Christian Mihr, of Reporters Without Borders, reports Tagesschau. President Erdogan in Berlin. Photo: DPA
The organization was protesting against the restriction of freedom of the press in Turkey.

Thousands of Erdogan critics have vowed to take to the streets in Berlin and across Germany during his visit to protest against everything from Turkey's record on human rights to its offensive against Kurdish militia in Syria.

However, he has received support too. On Thursday people lined Unter den Lindin, in central Berlin waving Turkish flags in anticipation of his arrival.

Ties between the NATO allies plummeted after Erdogan's government arrested tens of thousands of people in a mass purge following a 2016 coup attempt, including some who were also German nationals.

Chancellor Angela Merkel, whose country is home to a three-million-strong Turkish community, has repeatedly stressed the importance of good relations with Ankara, a partner she relies on to help stem the flow of migrants arriving on European shores. With no shortage of political and economic issues hanging over the visit, the shadow of football also looms large.

Turkey and Germany are locked in a bitter contest to host the Euro 2024 tournament, with the winner to be announced several hours after Erdogan's arrival.

'Step up the fight'

Erdogan has said he would use the visit to improve relations and also to press Germany to step up the fight against “terrorist groups” like the Kurdistan Workers' Party (PKK) and the movement of Muslim cleric Fethullah Gulen, whom Ankara blames for the failed coup.

Despite the tensions, Berlin and Ankara have been at pains to rebuild ties at a time when Erdogan is openly sparring with US President Donald Trump and the Turkish economy is in rapid decline.

The gradual rapprochement began after German-Turkish journalist Deniz Yucel was freed in February, while journalist Mesale Tolu was also allowed to return to Germany last month. Both still face terror-related charges in Turkey.

German President Frank-Walter Steinmeier welcomed Erdogan – on his first official visit to Germany since he became president in 2014 – with military honours and a state dinner at Bellevue Palace is planned on Friday – which several opposition politicians have vowed to boycott.

During his stay he will also twice meet Merkel for talks that are also expected to focus on the Syria conflict.

On Saturday, Erdogan will travel to Cologne to open one of Europe's largest mosques, commissioned by the Ankara-controlled Ditib organisation.