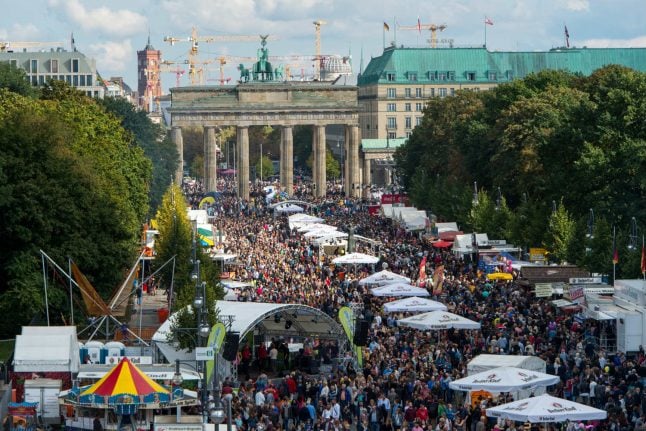 October 3rd has been celebrated as the day of German Unity for 28 years. This year, Berlin will host the official celebrations with a three day festival.

The celebrations will centre around the Brandenburg Gate and Straße des 17. Juni and include family events, debates, historical remembrance and music. An estimated one million visitors will pour into the festival, which will run from 2pm until midnight on all three days.

A big concert and firework display will mark the end of the festival on the evening of October 3rd. You are even able to vote online for which fireworks should be set off when, in an attempt to show the power and importance of democracy. Prizes are awarded for the biggest pumpkins in Germany. Photo: DPA

Set in the beautiful grounds of Ludwigsburg Palace, this is the largest Pumpkin Festival in the world. It is not only a festival for children, but for adults too, with gourmet food and drinks (all with pumpkin as an ingredient, of course) alongside children’s entertainment and activities such as storytelling and a Halloween carving tent.

A must-attend for all foodies, this festival is a celebration of creative cuisine, focusing on artisanal food production. The festival aims to make a statement about how we can lead our lives more fairly and sustainably through food “Good food for everyone! For consumers, for producers, for the environment.”

On Saturday and Sunday,over 150 producers from all over Europe will set up stands for a food market – including both street food and produce such as local Brandenburg fruit and vegetables, Puglian tomatoes and Slovenian wine. Throughout the week there are various other events, including workshops on topics including honey, bread and of course Wurst. There is an endless supply of books at the world's largest book trade fair. Photo: DPA

The perfect match for Germany’s book lovers, the Frankfurt Book Fair is the world’s largest book trade fair. The first three days of the festival are only open to those in the business, but the weekend at the end of the festival is open to the public and is well worth a visit.

This year marks the  the 365th edition of the Weimar Zwiebelmarkt, the oldest folk festival in Thürigen. There are about 600 stalls selling various onion related wares, alongside a whole programme of music and events.

Highlights of the festival include trying the special onion cake, the crowning of the Zwiebelmarkt Queen, and the display and sale of Zwiebelzöpfe, braids made of onions and decorated with flowers. On the Saturday of the festival there is even a city run including a children’s race, a 10km race and a half marathon. The route runs right through – not surprisingly – the middle of the Zwiebelmarkt. A must for all classical music lovers is this festival which spans three states – Saxony, Saxony-Anhalt and Thürigen – in honour of the Henrich Schütz. He is considered the most important German composer of the early Baroque period and has been described as the father of modern German music.

Between the opening concert in Weißenfels on October 5th, and the final concert in Dresden on October 14th, there are almost 40 different performances which you can attend, all celebrating German Baroque music. You can find tickets here. A press conference takes place for the 2018 festival in front of works by Paolo Roversi – part of the exhibition 'Between Art & Fashion. Photographs from the Collection of Carla Sozzan' in the Museum for Photography, Berlin. Photo: DPA

As the weather gets a bit colder, there’s no better way to spend a weekend or an evening than in the warmth of a gallery. Germany’s largest photography festival is back in Berlin for the 8th time this October with over 120 locations, 300 events and 500 artists.

The festival will open at C/O Berlin at Amerika Haus, which will also be the home of two major exhibitions throughout the month: Back to the Future. The 19th Century in the 21st Century, and Nicholas Nixon. Life Work.

The festival will also include talks from artists, live performances and screenings, and workshops for both adults and children. You can see the programme of events here. This festival takes places at the heart of the German wine route on the first and second weekends of October every year. It is the second largest wine festival in the world. One advantage of the colder climate now in Germany: lots of wind. This is the only place in Germany where professional windsurfers compete and it is well worth the trip up north. Brandenburg Beach on the idyllic island of Sylt in Schleswig-Holstein will play host, not only to fierce competition in four windsurfing categories (wave, freestyle foil and slalom), but to other entertainment.

Throughout the competitions there will be stalls selling food and crafts, and one of the highlights of the programme are the nightly after-surf parties in the event marquee with numerous DJs lined up for the week.