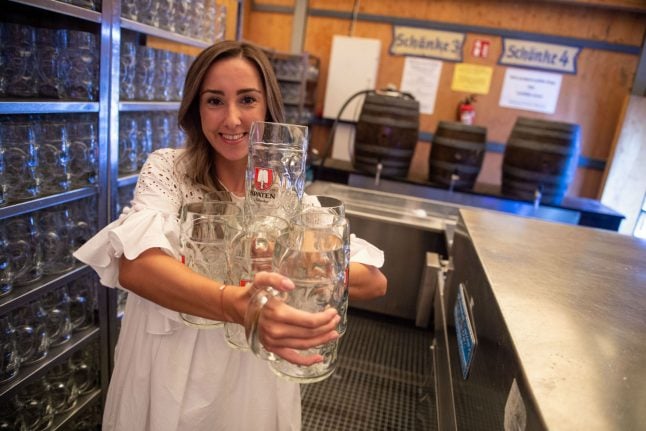 Angela Hopper is hauling hundreds of litres of beer through the marquee on each one of Oktoberfest’s 16 days, whilst covering dozens of kilometres.

“When I first started, nobody believed I could do it,” says the 25-year-old as she looks back on her first Oktoberfest two years ago. “'You will never manage it', they all said”. Hopper is rather petite at only 1.67 metres tall and a weight of 54 kilograms.

But her parents and friends were wrong. She survived the 16 days in the marquee, and came away only with aching feet. “I wanted to do it and so I prepared myself well. My fitness trainer came up with a special training programme. Trunk and back, alongside biceps and triceps.”

She has also been strengthening her legs, as from Saturday, September 22nd, she has been using them to help lift the heavy beer steins off the floor.

Not all the waiters and waitresses prepare like this. One of Hopper’s colleagues is a former professional driver. “He’s two metres tall, so a very different build to me. He can carry 14 beer steins with no problem.” Hopper herself stops at 8 steins – when they are full each can weigh more than 2 kilograms.

“We also have waitresses who are well over 60 years old,” says Claudia Neuhofer, who runs the service in the marquee.

Hopper works in a team of four. If one of them dropped out, it would be a disaster. “Last year there was a violent flu outbreak in the tent. I had a bad fever for three days. It was really tough, but you just can’t let the team down – we would never be able to manage with just three of us.”

A few days before the Anstich (the tapping of a beer barrel which signals the start of the festival), Hopper heads to the pharmacy to stock up on bandages, blister plasters and painkillers.

“You have to be tough,” says Hopper. “You can’t feel tired, or feel pain. Nor can you feel disgust.”

For example, last year a guest threw up all over her – she quickly got changed and then got back to work.