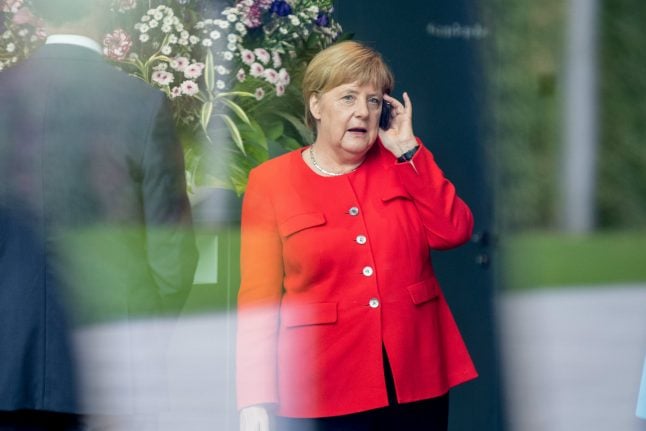 While Merkel remains one of the country's most popular politicians after 13 years in power, her latest “grand coalition” has proved fragile and fractious.

Its painful birth was the product of six months of tense negotiations following the poll, setting the stage for a loveless union of rivals.

Immigration — and specifically Merkel's decision not to close the border to more than one million asylum seekers at the height of the refugee influx in 2015-16 — continues to roil the political landscape.

Voter anxiety over the policy swelled support for the far-right Alternative for Germany (AfD) party, which captured nearly 13 percent of the vote in the September 24th, 2017 general election.

Its disruptive presence has upended the balance of power in German politics that had reigned for most of the post-World War II period, and exacerbated a splintering of the party landscape.

Here is an overview of the three crises that nearly toppled Merkel this year:

Merkel's conservative Christian Union bloc failed to capture a decisive win in the general election, and their dismal 33 percent showing meant they needed to seek a coalition partner.

The even weaker 20.5 percent result for the Social Democrats (SPD) led them to reject a new partnership with Merkel, blaming her long shadow during the previous four years of co-governance for letting them languish in the polls.

And an attempt for a groundbreaking tie-up with the ecologist Greens and the pro-business Free Democrats dissolved in acrimony after weeks of talks.

So the only alternative to forming a ruling majority was to try to coax the beleaguered SPD back into government, or demand voters return to the ballot box.

The fraught marathon negotiations produced another awkward right-left grand coalition, with Merkel in the shaky centre.

Trouble, however, was not far around the corner.

The most vocal critic of Merkel's immigration policy within her conservative camp, Horst Seehofer, insisted on taking control of a beefed-up interior ministry.

From this perch, he nearly drove the administration into the abyss in July with an ultimatum to turn away migrants at the German border with Austria.

Merkel was able to placate him with a pledge to forge bilateral agreements with EU partner countries for migrant returns, but only after the coalition had teetered on the brink for two weeks.

The deal also created the impression of a chancellor who could be blackmailed, underlining the image of a weakened leader in the twilight of her reign.

The tenuous peace with Seehofer proved short-lived, as anti-migrant riots in the eastern city of Chemnitz in late August provided a new test for the government.

Merkel condemned the ugly scenes of neo-Nazis rampaging in the streets – triggered by the fatal stabbing, allegedly by asylum seekers, of a German man during a street brawl.

Singing from a very different song sheet, Seehofer said he wished he had been able to take part in the angry protests against the killing and called the immigration issue “the mother of all political problems” in a pointed jibe at Merkel.

Days later, the head of the domestic intelligence agency, Hans-Georg Maaßen, gave an incendiary interview in which he questioned the veracity of an amateur video from Chemnitz showing demonstrators chasing a dark-skinned man on the street.

The remarks sparked an uproar and revived accusations that Maaßen had far-right sympathies. It was not long before the opposition and the SPD were calling for his head.

Seehofer, however, staunchly defended Maaßen, setting up yet another showdown in Berlin.

The outcome, in which Maaßen was removed from office but promoted to a senior role in Seehofer's ministry complete with a pay rise, satisfied precisely no one — setting up the next bout of political turbulence.

The AfD gained two points out of the Maaßen controversy to reach 18 percent support — making it the second most popular party in the country after Merkel's Christian Democrats.

The SPD slipped to a humiliating third place behind them, raising pointed questions among its members about how long the party should continue to haemorrhage support from within Merkel's government.

READ ALSO: One year on from election, far right has transformed German politics