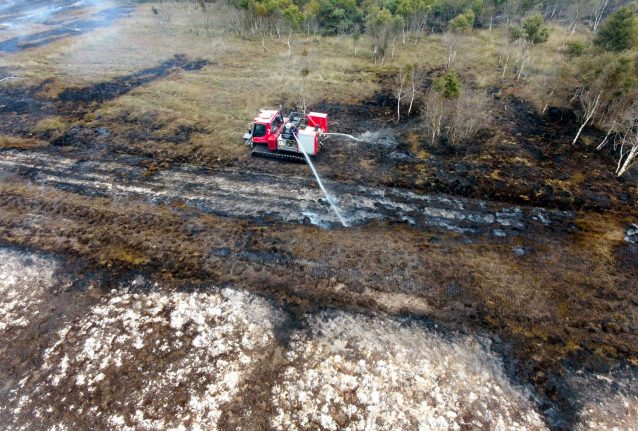 Fire teams our water onto the fire. Photo: DPA

Roughly five square kilometres of moorland have been consumed by a fire on the Bundeswehr testing ground in Meppen, Lower Saxony after soldiers fired missiles from a helicopter. An army fire vehicle was supposed to immediately drive to the scene to quell the flames, but it malfunctioned. A backup vehicle was undergoing repairs.

A Bundeswehr spokesperson explained that the fire had since burned up to a metre deep into the moorland, leaving the fire services with a formidable task on their hands. Roughly 5,000 litres of water have been pumped onto the area each minute since Friday, broadcaster NDR reports, but the fire is still burning.

“Especially in period of extreme drought like we had this summer this type of thing can happen,” the army spokesperson said.

But environmental groups have been left angered by what they see as a careless attitude on the part of the army.

Environmental group NABU claim that the army should not be testing missiles during periods of drought. Spokesman Felix Grützmacher said that the consequences of the fire are extremely damaging to the environment since the peaty ground contains large quantities of CO2.

According to Grützmacher, between 500,000 and 900,000 tonnes of CO2 may have already been released into the atmosphere by the fire – roughly the same amount as 50,000 Germans would use in a year.

The Bundeswehr caution that the fire could continue to smolder for several weeks. Some 300 fire fighters are currently on operation at the site with their main task being to ensure that surrounding forests do not catch fire.