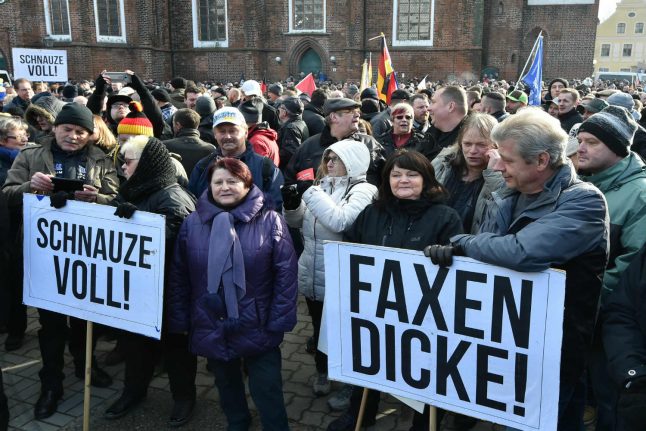 Anti-immigrant protesters at Oberkirchplatz in Brandenburg holding placards with the signs "Fed up!" and "Had enough!" Photo: DPA

Murders and rapists have flooded the country with crime – according to Germany’s far-right party Alternative for Germany (AfD). If Alice Weidel, the AfD party leader is right, Germany is in a dire situation. The security situation has “dramatically increased” and statistics from the Federal Criminal Police Office are “in black and white,” she said last Thursday.

“The country has become safer despite taking in many refugees,” he said. “It hasn’t been this safe in a long time – but it doesn’t feel that way for many people.”

Crime has fallen sharply in the last 20 years according to the number of crime recorded nationwide in 2017.

“However, the obvious decline in crime in recent police statistics hasn’t given people any reassurance,” said Hestermann.

“The citizens are more afraid, although they have less reason to do so,” he said.

Measuring perception of crime risks against real risk, Feltes discovered that public anxiety was 65 times higher than the real risk.

For example, out of the 3,500 representatives Ruhr-University Bochum surveyed in 2016, almost one in five people (19 percent) anticipated being the victim of a robbery, when the real risk was only 0.3 percent.

These results compare starkly to the last survey conducted in 1998, when 65 percent fewer people claimed to have been victims of assault.

Respondents from the 2016 survey also said that they reported crime much more frequently than they did in the past, so the number of unregistered crimes should have decreased rather than increased.

SEE ALSO: What we learned from this year's crime statistics, and what we didn't

Are the statistics skewed?

However, there is a disproportionate number of criminal suspects who are immigrants.

These immigrants are predominantly male and younger and poorer than the average German. But if you compare their criminal activity to a corresponding German group, the fact that they are immigrants becomes mostly irrelevant.

Crime statistics have other pitfalls that distorts the national picture. They include crimes committed by foreign tourists and business travelers in Germany. In a city like Berlin, which attracts 8 million tourists a year, this is noteworthy.

“The German media have once again morphed the violent immigrant into a figure of fear. This approach is completely different from the coverage after the New Year’s Eve incident in Cologne,” he said referring to the sexual assaults and muggings that took place in January 2016 and involved around 1,000 drunk immigrant men.

The number of television reports of criminal foreigners has quadrupled since 2014, yet the proportion of non-German suspects in crime statistics has increased by only one-third.

However, Feltes argued that this fact does not necessarily lighten the burden on the immigrant community since the vast majority of violent crimes against immigrants are perpetrated by immigrants.