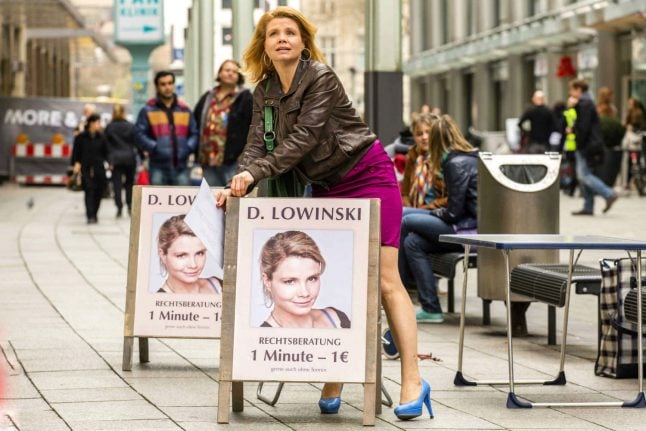 A still from Danni Lowinski, about a woman who charges per minute for legal advice. Photo: DPA

Often native language sources trump textbooks when it comes to later stages of language learning. You can gain a great familiarity with the fluency of a language through TV, and comedies in a foreign language can give you an insight into the sense of humour of a whole culture.

Sometimes TV shows are also available with subtitles, making them suitable for all language abilities. We have put together a selection of German TV comedies which might help you improve your language skills, whatever your level – and give you a few laughs at the same time.

Following the everyday lives of a Turkish-German step-family in Berlin, Turkisch für Anfänger (Turkish for Beginners) this show is a lot of fun and very quick-witted.

After Doris falls in love with Metin, a police officer of Turkish descent, their families move in together, much to the disdain of their children. The story is narrated by Lena, Doris’s 16 year old daughter. Cultural differences and conflicts create a comedy of errors in this series as the two families merge.

Even without subtitles, the German is fairly easy to understand, and it can educate you on the Umgangsprache or the punchy way that people speak in real life thanks to the colloquial dialogue.

It was originally broadcast between 2006 and 2008 and has three seasons – so get stuck in.

Available on Amazon Prime Video in Germany, on MHz Choice in the US and Canada (with English subtitles), or on DVD

Following the story of a young hairdresser, Danni, who has qualified as a lawyer by taking night classes, Danni Lowinkski has five seasons, which were broadcast between 2010 and 2014.

In the show, Danni is unable to find a job at a solicitors' firm so she sets up a law clinic in a small shopping centre in Cologne.

Danni charges a euro per minute for her legal advice, hoping to gain work experience and then find a job. She makes friends with store holders in the shopping centre and begins to represent (often entertaining) clients in court.

The German is a bit more challenging for this show and there are no subtitles, but it is still a good option if you already have a strong language ability.

Available on Sky in Germany, or on DVD

A mockumentary inspired by Ricky Gervais’s The Office, this programme follows Bernd Stromberg in the office of a fictional insurance firm ‘Capitol Versicherung AG’.

In the show, which has five seasons and was broadcast between 2004 and 2012, Stromberg is the head of the claims settlement department. The sitcom, which is hugely popular in Germany, follows his department’s often chaotic day-to-day life.

It is available free online and although it doesn't have subtitles, its fairly sophisticated sense of humour is still easy to grasp.  Probably not suitable for beginners but a great option, particularly for fans of The Office.

Available free on My Spass and on Amazon Prime Video in Germany, Has been on Netflix in the US in the past but currently only available on DVD outside of Germany.

The Pastewka has echoes of the American series Curb Your Enthusiasm, starring Seinfeld director Larry David.

It follows the life of the Cologne-based comedian Bastian Pastewka, who continually causes problems for himself due to his clumsiness and habit of fibbing.

The show features lots of running jokes, which is great for a foreign language audience, since once you have understood a joke once, its repetition will be automatically funny. Series eight also features German subtitles, which is a massive bonus and a great way to learn when watching in a foreign language..

Its hilarious seven seasons were broadcast between 2005 and 2014. This year it was taken over by Amazon, and series eight was released exclusively on Amazon Prime Video.

Knallerfrauen is a comedy sketch show starring Martina Hill with four seasons, which were broadcast between 2011 and 2015. The humour is often sophisticated but there is also a large amount of slapstick – physical and non-verbal – comedy, which translates well into any language.

Hill plays with female stereotypes and switches between lots of entertaining roles. The humour comes from the female point of view, which is quite refreshing.

You can also find lots of clips on the Knallerfrauen YouTube channel, and the majority have English subtitles. These are great small comedy clips perfect for those with only beginner’s German, due to the type of comedy and uncomplicated dialogue.

You can find full catch up episodes on Sat1 online, or clips on YouTube. It is also available on DVD.

Mord mit Aussicht (Murder with a View) is a satirical crime comedy series with three seasons broadcast between 2007 and 2014. The show follows an ambitious detective, Sophie Haas, who, instead of her expected promotion to head of the Cologne murder department, is sent to lead the police department in a sleepy rural town. You can guess how that goes down…

The majority of the humour centres on the culture shock of Sophie’s move to the city and the characters who she encounters, and despite first impressions of the town, she manages to find some crimes to solve.

There are no subtitles availability for the show and it is probably best for those who already have a reasonable level of German, although the language isn't extremely challenging and the humour is not too difficult to understand.

What do you think about our choices? Do you have any recommendations? Let us know: [email protected]

IMMIGRATION
Are these the best German cities to learn a foreign language?
Url copied to clipboard!