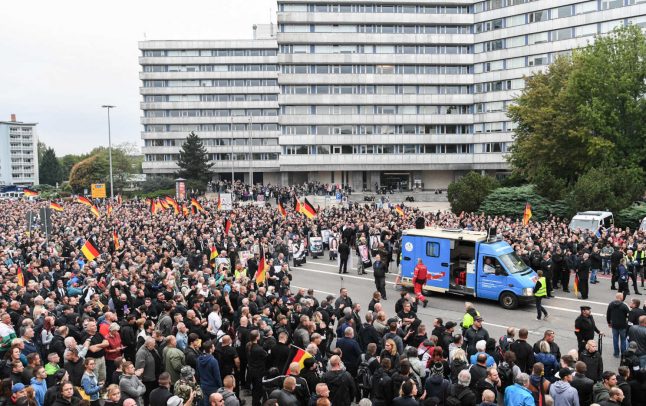 Protesters gather at a far-right march in Chemnitz. Photo: DPA

The verdict was harsher than the suspended sentence handed to another suspect a day earlier, who had also performed the Nazi greeting during rallies sparked by the killing of a German man, allegedly by asylum seekers.

A prison sentence was deemed appropriate in this case because the accused had a number of previous convictions, including for assault, a spokesman for the district court in Chemnitz told regional broadcaster MDR.

Thousands of demonstrators had answered a call by the far-right party AfD and the Islamophobic Pegida street movement to march over the fatal stabbing on August 26th of Daniel H.

A handful of people were seen publicly making the illegal straight-armed salute during the heated rallies while others were shouting anti-foreigner slurs in scenes that shocked Germany.

The swastika and other Nazi symbols are banned in Germany. Anyone caught breaking the law can be fined or face a jail term of up to three years.