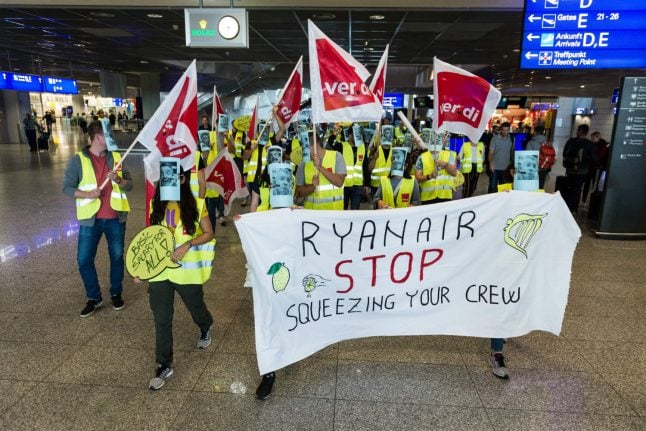 “All 12 German bases are affected, especially the bigger ones in Frankfurt/Rhine-Main, Hahn and at the Berlin airports,” said the vice-chairman of Germany's Cockpit pilots' federation (Vereinigung Cockpit or VC), Markus Wahl.

“We hope that this strike shows a significant effect, that the company realizes the employees won't accept rotten working conditions and bad pay any longer,” said Verdi spokesman Andreas Splanemann at the demonstration.

But with affected passengers largely warned off in advance, there were few stranded travellers to see the workers with their placards reading: “no rights, no flights” and “Ryanair must change”.

The Irish budget carrier said it was cancelling 150 out of 400 scheduled flights to and from Germany because of the walkout, which it slammed as “unacceptable” and “unnecessary”.

The Berliner Zeitung said that in the German capital 40 flights at Schönefeld and Tegel had been cancelled.

At Frankfurt airport, the Hessenschau reports that 28 of the 44 scheduled flights there had been axed on Wednesday. Employees were also demonstrating with placards there. In North Rhine-Westphalia a Cologne/Bonn airport spokesman said initially 20 of the planned 56 Ryanair flights due to take off or land had been cancelled, reports DPA. In Weeze, according to a spokesman, 12 of the 28 flights were axed.

In Hamburg, however, only two of the 14 scheduled flights were expected to be cancelled.

Meanwhile in Bavaria, Munich and Memmingen airports appeared not to have cancellations, while in Nuremberg six of the twenty Ryanair connections were expected to be disrupted.

Ryanair also said on Tuesday it may have to close some bases across Germany and slash jobs if the stoppages drag on.

Germany's Cockpit pilots' federation and the Verdi service workers' union called the 24-hour strike, which started at 3am after they said talks with Ryanair management were deadlocked.

The strike comes as Ryanair is already bracing for a mass coordinated walkout by cabin crew in Belgium, Italy, the Netherlands, Portugal and Spain.

Union leaders are expected to announce details of the stoppage in Brussels on Thursday.

They have vowed to stage “the biggest strike action the company has ever seen”.

Ryanair has been clashing with worker representatives ever since it took the unprecedented step last year to start recognizing trade unions in a bid to avert widespread Christmas strikes.

Ryanair, a 33-year-old firm, has however struck some labour agreements since then, reaching its first-ever union deal with Italian pilots in late August.

The breakthrough prompted Ryanair to back down from an earlier threat that it would move several aircraft and 300 jobs from Ireland to Poland.

Germany's Cockpit and Verdi unions, which represent some 400 Germany-based Ryanair pilots and 1,000 flight personnel, condemned the airline's attempt to squeeze them with a similar threat.

“This is how Ryanair deals with its employees: putting pressure on them, scaring them and threatening job losses,” Cockpit's vice president Markus Wahl told AFP.

“We are not making a threat,” Ryanair's chief marketing officer Kenny Jacobs told a Frankfurt press conference on Tuesday.

“If you have ongoing strikes, that's the economic impact.” The no-frills airline boasts lower costs per passenger than its competitors and is eyeing profits of around €1.25 billion this year.

But staff have long complained that they earn less than counterparts at rival airlines.

Another key gripe of workers based in countries other than Ireland is the fact that Ryanair employs them under Irish legislation.

They say this creates huge insecurity for them, blocking their access to state benefits in their country.

Unions also want the airline to give contractors the same work conditions as staff employees.

Ryanair counters that it has already offered significant pay increases and steadier contracts. It said German pilots can make “up to €190,000 a year”.

But Cockpit's Wahl said that only applies to “a handful” of people, with starting salaries around €39,000 and the most experienced fliers taking home around €110,000 a year in fixed pay, which can be topped up depending on flight hours.

The Verdi union said Ryanair cabin crew earn a basic gross salary of €800 to €1,200 a month on average, far below what rival EasyJet pays.

“The wages are so low that they are insufficient to ensure a decent living standard,” Verdi board member Christine Behle said.