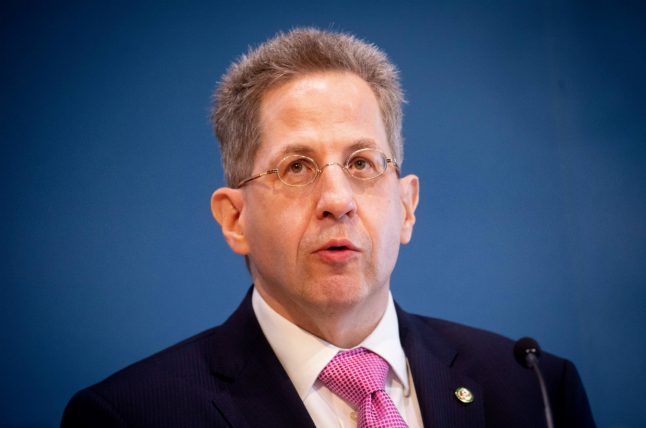 Hans-Georg Maaßen, the president of the Federal Office for the Protection of the Constitution (BvF). Photo: DPA

Hans-Georg Maaßen, the president of the Federal Office for the Protection of the Constitution (BvF) told BILD on Friday that there was “no reliable information that such hunts took place”.

Right-wing protesters, neo-Nazis and opponents of Germany’s immigration and refugee policy had demonstrated in the Saxon town, following the fatal stabbing of a 35-year-old German man with Cuban heritage, on Sunday, August 26th.

Counter demonstrations by left-wing protesters also took place in the days following the incident, and a concert held under the banner: ‘Wir sind mehr’ (we are more) attracted around 65,000 people.

Maaßen told BILD that there was no proof that a video circulating around the Internet which showed hooligans chasing people they believed were foreign near Johannisplatz in Chemnitz, “is authentic”, he said.

“The skepticism towards the media reports on right-wing extremist hunts in Chemnitz are shared by me.”

Maaßen added that the footage could be part of “targeted misinformation”, but did not discuss where that may have come from.

He said: “Based on my cautious assessment, there are good reasons to believe that this was intentional false information, possibly to detract attention from the murder in Chemnitz.”

Oppermann added:  “We have a state monopoly on violence and, frankly, defending it is also the responsibility of the President of the Office for the Protection of the Constitution.”

The debate over the footage and coverage of the Chemnitz unrest has dominated German news reports in recent days.

Chancellor Angela Merkel and her government spokesman Steffen Seibert had spoken of “the hunting down of people” after the footage of far-right demonstrators appearing to do this in Chemnitz had emerged.

“Such riotous assemblies, the hunting down of people who appear to be from different backgrounds or the attempt to spread hate in the streets, these have no place in our country,” Merkel’s spokesperson Seibert said.

Seibert declined to comment directly on the controversy on Friday, stating only that “we have said everything there is to be said” and that the BfV chief has an “important job with many responsibilities”.

But Maaßen's comments drew fire from the government parties and the opposition, with the Greens calling them “frankly absurd” and a “frontal attack” against Merkel.

He criticized the way the way the media had covered the event, saying: “There was no mob,no hunting and no pogroms.”

Meanwhile, protests are continuing in Chemnitz.

On Friday at 6.30 pm, the right-wing populist movement Pro Chemnitz is planning to demonstrate again at the Karl Marx Monument in the city centre.

The city council had said organizers expect around 1000 participants.

However, at the same time, and only a few hundred metres away from the demonstration, the Chemnitz Theatre is holding a free concert with classical music against xenophobia. 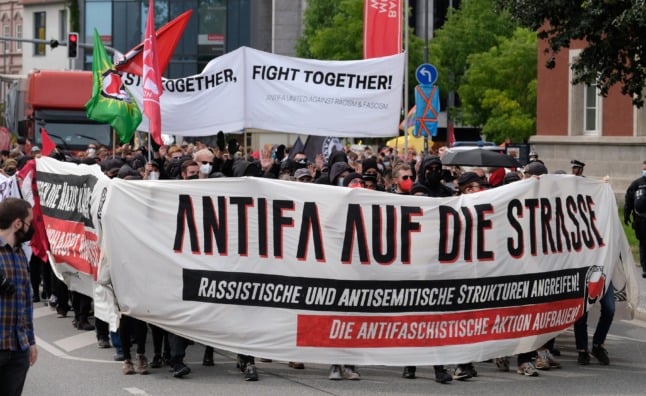 Many people took to the streets of Weimar with banners and flags on August 7th to demonstrate against a neo-Nazi march. Photo: picture alliance/dpa/dpa-Zentralbild | Sebastian Willnow

Meanwhile, around 120 people took part in the neo-Nazi march itself, which was roughly in line with expectations, the spokesperson said. Participants of a far-right march walk down the street in Weimar with flags and  banners reading “Destroy capitalism: freedom, justice, work”. Photo: dpa-Bildfunk

Because both sides had posted online to mobilise their members across Germany, the city and the police were prepared for considerably more participants on both sides.

The paper reported that there was a large police presence in Weimar, including officers from other states, such as Bavaria and Lower Saxony, as well as the federal police force, which had announced checks on train travellers at the station. A water cannon was in place near the station from Saturday morning.

Some of the more radical counter-demonstrators tried to access the area where the far-right march was taking place multiple times, according to the police. Police hold back participants of a demonstration against a far-right march. picture alliance/dpa/dpa-Zentralbild | Sebastian Willnow

Around 25 officials from Lower Saxony were involved in scuffles in the process with police using pepper spray and batons to prevent this.

The pepper spray used also hit police officers, according to observations by a dpa reporter on the scene, Bild reported. Participants of the counter-demonstration, some with completely covered faces, stand together on a street in Weimar. Photo: picture alliance/dpa/dpa-Zentralbild | Sebastian Willnow

Some of the counter-demonstrators were expelled from the area, according to the police, and some violated the ban on face coverings.

A spokesperson for Mobit, a Thuringia-based initiative against far-right activity, said they were pleased so many people from different cities and regions in Germany were against the neo-Nazi march. Participants of neo-Nazi march walk down the street in Weimar with flags and banners. Photo: picture alliance/dpa/dpa-Zentralbild | Sebastian Willnow

The attempt by the right-wing extremists to mobilise a larger number of “Querdenker” had apparently not been successful, they said.