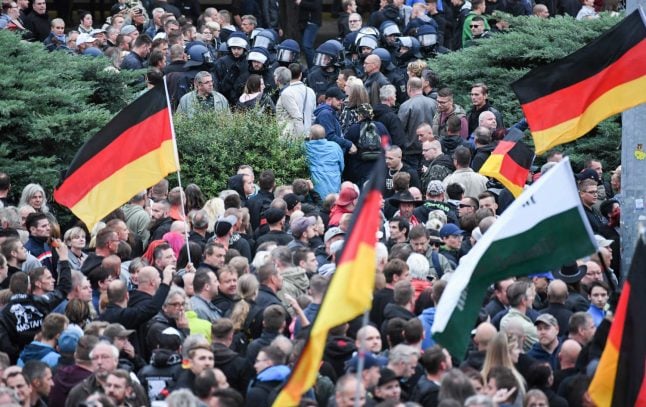 Demonstrators at the AfD and PEGIDA rally held on Saturday in Chemnitz. Photo: DPA

On Tuesday it was announced that the AfD will not be monitored by the authorities in Saxony.

Gordian Meyer-Plath, president of the State Office for the Protection of the Constitution, told RBB during a radio interview that there are many legal requirements for surveillance to happen.

This currently cannot be proven for the AfD in Saxony, said the President of the Constitution.

It came after some prominent politicians spoke out in support of the AfD being put under surveillance.

It’s not the first time a call has been made for AfD to be monitored by the Office for the Protection of the Constitution, known as the BfV. But amidst violent clashes in Chemnitz and concern over far-right extremism among the AfD’s youth wings, could this actually happen and – if so – what are the implications?

Why are politicians calling for it now?

At the weekend, Thuringia’s AfD chief Björn Höcke, took part in a march in Chemnitz, which was organized by the far-right, anti-Islam group PEGIDA. It was held after a man was stabbed to death on Sunday, August 26th, allegedly by two immigrants.

The Social Democrats (SPD)' Thomas Opperman, vice president of the German Bundestag, described the fact that AfD took part into the march as a “turning point” and said it was an incident that shows “how the AfD and the neo-Nazis cooperate”.

The refugee issue divides society, and the AfD “rides ever more radically on this wave,” he told Welt. He added that this must be observed closely.

Opperman is one of the senior politicians, from the SPD, Greens and the CDU, who is calling for the AfD to be be monitored by the country’s domestic security agency, BfV.

Are the AfD already being watched closely?

Two youth wings of the AfD in Bremen and Lower Saxony have been placed under observation amid concerns over right wing extremism.

He said the decision had nothing to do with the demonstrations in Chemnitz but based on a strong “significant ideological and personal overlap” with the far-right fringe Identitarian Movement (IB).

Pistorius said the JA represents a world view “in which minorities such as refugees or homosexuals are systematically devalued and defamed,” reports Tagesschaue.

In Lower Saxony, the case of Lars Steinke, a chairman of the JA board, has recently sparked concern. In early August, Steinke had called Claus Schenk Graf von Stauffenberg, the man who tried to assassinate Hitler in 1944, a “traitor” in a non-public Facebook entry. A few days later Steinke resigned as chairman.

Pistorius's counterpart in Bremen, Ulrich Mäurer, said that he had already commissioned a review of the JA group in the city last year and the final draft had been presented to him last week.

Mäurer said: “These people have dropped their masks several times in the recent past, parts of the messages in this group are pure racism.”

How has the AfD reacted?

Following the news that the youth wings in Bremen and Lower Saxony would be observed, the AfD announced it would disband these associations.

The decision was made “for the protection of the entire organization”, said Damian Lohr, chairman of the youth organisation, reports Tagesschau.

Lohr went on to question the decisions of the Office for the Protection of the Constitution. “Neither individual national associations of the JA, nor the Young Alternative as a whole are anti-constitutional organizations, which are against the free-democratic basic order of the Federal Republic of Germany,” he said.

The revelations came as the other mainstream parties in Germany called for the BfV to monitor the AfD for extremism, in light of right-wing violence in Chemnitz.

Has full surveillance been ruled out?

When asked about the calls to monitor the AfD, Chancellor Angela Merkel said that what the BfV investigates is “not a political decision, they are decisions based on facts”.

Merkel said that she had heard from regional leaders that there were individual actions that needed to be monitored, and that the situation would be handled the same way on the federal level, reports Deutsche Welle.

Olaf Scholz, her Social Democrat finance minister, said he agreed with Merkel but added that the clashes in Chemnitz gave clear cause for a renewed look at whether the AfD, which entered parliament for the first time last year, should be monitored, reports Reuters.

Federal Interior Minister Horst Seehofer and his Bavarian CSU party say the conditions have not been met to monitor the AfD as a whole, but they will keep an eye on developments and individuals.

What does the Office for the Protection of the Constitution (BvF) do?

Intelligence agencies monitor the far left and the far right, as well as extremists suspected of planning attacks.

The BvF can be charged with collecting and analyzing information on behaviour and efforts which are viewed as being against the free democratic order or against the security of the federation or one of its states.

It can gather the information by accessing public sources, such as newspapers or attending public events. In some cases it can use covert surveillance, as well as mail and telephone interception, if authorized.

Amid all of the hype over potential surveillance, Andreas Kalbitz, the top AfD politician in the state of Brandenburg and one of six sharing the title of chairman at a national level, accused the mainstream parties of trying to start an anti-AfD panic.

In a press release he said: “The call for the AfD to be observed by the BfV is more than a desperate act by the helpless older parties.

“We're seeing the desire for an abuse of power unmatched in reunified Germany.”