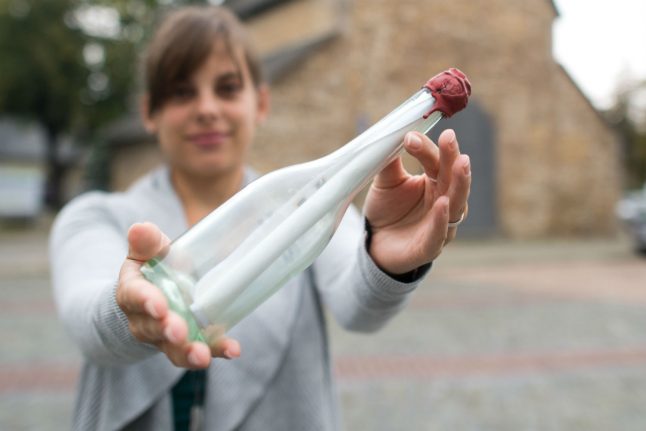 An employee from the city of Goslar holds up the found bottle. Photo: DPA

On a gloomy day in 1930, a group of craftsman in Goslar, a small town at the foot of Germany’s Harz mountains, wistfully wrote a note. Together, they described the current hard economic times, and their wish for a better future.

They placed it in a glass bottle, sticking it in the cathedral where they worked.

Eighty-eight years later, the grandson of one of the authors serendipitously stumbled upon the note whilst at work.

The roofer Peter Brand discovered the bottle during a routine check under the cathedral's roof, said Goslar Mayor Oliver Junk on Monday.

Brand’s grandfather, who was also a roofer, had left a message for posterity alongside his colleagues on March 26th, 1930.

In their letter, the craftsmen – with some typing errors on the typewriter – complain about the difficult time after the First World War, “the inflation years, where we work all week for one pound of butter, and one bread”, and of rising unemployment in Germany.

At the same time, they wished that “our descendants will find this letter in a better time.”

Strictly speaking, however, according to the Federal Maritime and Hydrographic Agency in Hamburg, this is not a message in a bottle.

“A message in a bottle is thrown into the water and carried over the current,” said a spokeswoman. Nevertheless, the old letter was perfectly preserved in the a bottle.

The original message in Goslar is to be “kept in a safe place,” it said. However, a duplicate version was deposited at the site on Monday.

Other bottled messages have turned up in recent years in Germany. In 2014 in the northern city of Kiel, fisherman pulled a 101-year-old beer bottle out of the water, containing a perfectly intact postcard – then the world’s oldest message in a bottle. It was safely delivered to the writer’s 62-year-old granddaughter in Berlin.

In March 2018, a family in Perth, Australia found an even older message in a bottle. Dated June 12th, 1886, it was tossed off the German naval ship with a note that the finder return it to the German consulate when found.