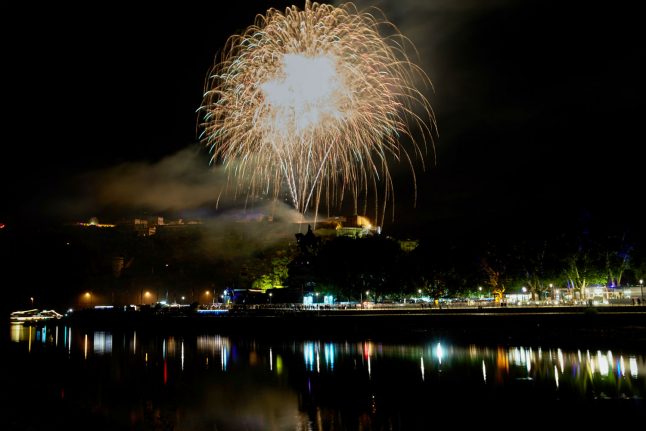 The closing fireworks at Rhine in Flames in Koblenz in August 2018. Photo: DPA The organizers of the India Festival. Photo courtesy of Ajit Ranade.

Germany’s Indian community is growing in size and influence, with close to 100,000 Indians or people of Indian origin now living in Deutschland. This Saturday’s first India Festival will showcase the southeast Asian country’s cultural highlights, ranging from flavourful food samples from several regions to yoga classes. The colourful Khatju Sapura Dance Company will be entertaining visitors throughout the day on the main stage, and vendors will also set up shop to sell their handcrafts ranging from scarves to ornate pots.

Hosted by the general consulate of India in Frankfurt and the umbrella organization Friends of India, a total of 6,000 to 7,000 visitors are expected, including Frankfurt’s mayor.

Calling all tech junkies: you won’t want to miss the IFA, Europe’s largest technology fair, which opens its doors on Friday for a wave of new product launches from over 1,500 exhibitors. Take, for example, a “convertible laptop”, which can be used as either a PC or tablet, and are increasingly popular for travel. Or simply high powered washing machines which put even Germany’s mighty laundry-devises to shame.

Visitors can also test out several new AI-influenced apps, such as a handy one from IKEA that allows users to virtually try out the furniture giant's sofas or bookshelves in their homes. A day ticket will only run you €17.50 euros, with special deals for students and families.

If you’re a fan of camping in the woods whilst wearing Medieval garb, look no further than this sprawling forest-side festival along the Czech border a little north of Nürnberg. The long weekend also hosts a line-up of bands known for Medieval rock and world music, such as Elfenthal and Alan Stivell, the French man known as the father of Celtic music.

Ninety minute long hands-on workshops will also teach participants about musical instruments from the harp to the wheel fiddle, handicrafts, and historic dances.

Fancy a cuppa tea at the backdrop of one of of Germany’s most gorgeous castles? Look no further than the Linn Castle along the Lower Rhine, the last of three Brit-themed festivals to come to the country this year. All aspects of British culture will be celebrated, whether Scottish Highland games, a sheepdog demonstration, or comic theatre. Even Paddington Bear will be on hand to tell children’s stories.

There will also be no shortage of Brit-infused options for shoppers, whether fish and chips, single malt whiskeys and wax jackets and hats. Onlookers watch fireworks in Bonn at a Rhine in Flames celebration in 2016. Photo: DPA

There are hardly more impressive ways to celebrate the last days of summer than in an idyllic boat ride along the Rhine, as the sky explodes into colourful fireworks. The summer-long event, held at various cities and towns along the Rhine river, will host its grand finale in Oberwesel on September 8th and St. Goar and St. Goarshausen on September 18th-21st. A flotilla of boats will drift along the romantic river, illuminating the water as live music from a lineup of local bands plays. The Oktoberfest band Eisbachmusi present the official mugs for the 2018 world famous festival.

Unless you’ve been living in a cave far away from Germany, it’s hard to have not heard of this pivotal German festival, which – contrary to its name – is a September hallmark that stretches into October.

Despite a beer mug slated to cost over €11 for the first time this year, the sprawling party is worth checking out at least once, whether or not you don a Dirndl or Lederhosen. If you’d prefer a more laid back, but equally festive and frolicky version of the event, Berlin also hosts an Oktoberfest during the same dates replete with Brez'n, pork knuckles and even a daily dirndl competition.

Located along the idyllic Lake Constance in southwest Germany, it’s no wonder that Friedrichshafen attracts boat enthusiasts from around the world for this nine-day festival. Almost 500 exhibitors from over 50 countries will present their products and accessories for sailing and leisure water sports. Guests can get their feet wet on one of the nearly 100 sail and motor boats available at the harbour for a test ride.