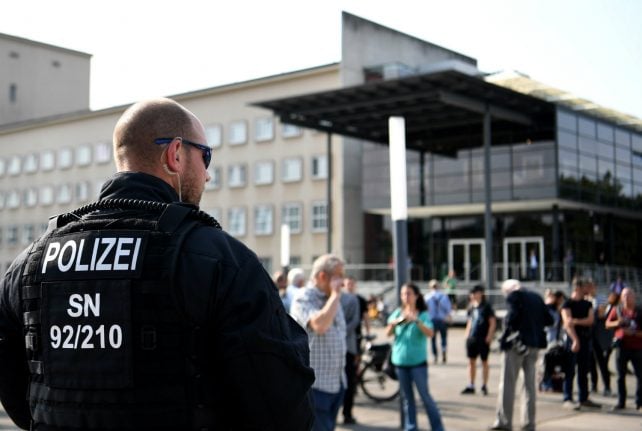 A police officer on duty in Chemnitz. Photo: DPA

The arrest warrant against an Iraqi man who is believed to have stabbed a 35-year-old German to death in Chemnitz at the weekend has been published on a far-right forum.

The stabbing triggered two days of unrest in the eastern city as far-right protesters took to the streets. In some cases they attacked innocent bystanders, often picking on them because of their foreign appearance.

The confidential document, which lists the name of the victim, the perpetrator and his place of residence and the name of the judge first appeared on Whatsapp groups linked to the anti-Islam Pegida movement. A list of witnesses to the crime had been blacked out.

Leaking arrest warrants is a federal crime in Germany.

The Interior Ministry in Saxony said that “we do not know at this stage who photographed the document. We immediately informed the justice ministry that the pictures have been put on the internet.”

Saxony’s state leader Michael Kretschmer (CDU) vowed on Wednesday to investigate how the arrest warrant had been leaked.

“This is unacceptable. It is a crime and we will get to the bottom of it,” he said.

His deputy, Martin Duldig (SPD), had even stronger words. “This is monstrous behaviour. We have a big problem to work through here,” he told broadcaster MDR.

“The police must understand that we won’t tolerate certain things anymore. Officers can’t act above the law,” he added.

The controversy follows an incident in the middle of the month in which a camera team for broadcaster ZDF accused police in state capital Dresden of purposefully impeding their work at a Pegida demonstration. The scandal widened when it was confirmed that a protester in the crowd who had harassed the camera crew was himself an off-duty police employee.

Duldig has in the past suggested that there are officers in the Saxony police force who have links to the far-right scene, which is particularly strong in the eastern state.