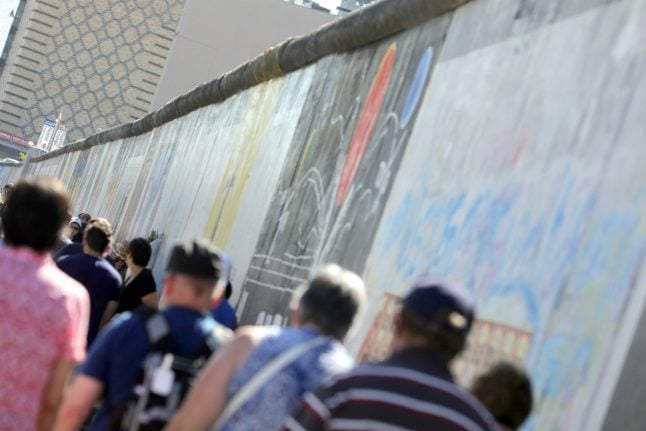 The walled-in “city within a city” will host the world premiere of the mysterious and mammoth “DAU” film project and social experiment of enigmatic Russian filmmaker Ilya Khrzhanovsky, 43.

Pending final approval from Berlin city authorities, which organisers said was “in the works”, staff plan to erect 900 concrete wall slabs, each 3.60 metres (about 12 feet) tall, for the 6.6 million euro ($7.7 million) event.

Visitors to the parallel world will have to apply online for entrance “visas” and swap their cellphones for off-line digital devices with an algorithm that will suggest a personalised tour.

Set on a city block on Unter den Linden boulevard, the time-capsule project is due to launch on October 12 and end with a ritualistic tearing down of the wall on November 9, the day of the historic event in 1989.

The aim is not to create “a Disney GDR” (German Democratic Republic), said Thomas Oberender, director of culture festival Berliner Festspiele which will host the mega-event.

“It is not a film premiere but a mixture of social experiment, artistic experiment and… an impressive form of world-building,” he told a Berlin press conference.

The aim, said organisers, is to spark “a political and social debate about freedom and totalitarianism, surveillance, co-existence and national identity”.

Long shrouded in mystery, a trickle of news and cryptic clues has created buzz and sparked controversy about the project, with critics labelling it a stunt hurtful to people who lived in communist East Germany.

“Out of respect for the victims who really experienced such situations, we should step away from this,” Berlin politician Sabina Bangert of the Greens party said, according to Tagesspiegel daily.

Others are excited about a convention-busting art event that will evoke, but not seek to replicate, the Cold War past of Berlin.

Germany's minister of culture, Monika Gruetters, said she was “absolutely convinced this will be a world event”.

Berlin's “DAU-Freedom” is set to kick off follow-up events in Paris in November (“DAU-Equality”) and London in early 2019 (“DAU-Fraternity”), all organised by the London-based Phenomen Trust, co-founded by Russian millionaire Sergey Adoniev.

The epic “DAU” film project, more than a decade in the making, has been labelled “Apocalypse Dau: the most insane film shoot of all time” by Britain's Daily Telegraph.

Dau was the nickname of Soviet nuclear physicist and Nobel laureate Lev Landau (1908-68), one of the fathers of the Russian nuclear bomb and an advocate of free love.

The project started in 2005 as a conventional biopic, with funding from several European countries, but evolved into what Caravan magazine labelled a “brutal and baroque movie project/human experiment”.

Hundreds of amateur actors were asked to live full-time from 2009-11 in a mock-up secret Soviet nuclear research facility dubbed “The Institute” that was built in Ukraine.

Participants reportedly had to dress, speak and act as if living under the Soviet regime, with penalties for using cellphones or social media.

Veteran cinematographer Jürgen Jürges, who spent three years on the set, said the aim was to shoot their unscripted interactions “everywhere, anytime… They lived, and we filmed them.”

A rare journalist to visit the site, from GQ magazine, wrote that Khrzhanovsky was ever-present, projecting “a carefully crafted self-portrait of a tyrannical genius”.

At the end, Khrzhanovsky reportedly had neo-Nazis destroy the elaborate set.

The resulting over 700 hours of footage have been edited into 13 feature films, several TV series and are due to appear in an online multimedia project, said producer Susanne Marian.

“The experiment is ongoing,” promises a trailer on the project website (https://dau.xxx/).

Reclusive Khrzhanovsky did not attend the Berlin press event.

Oberender thanked the “very many people who for months, and up to two years, didn't speak about this project — a small miracle in a city like Berlin”.