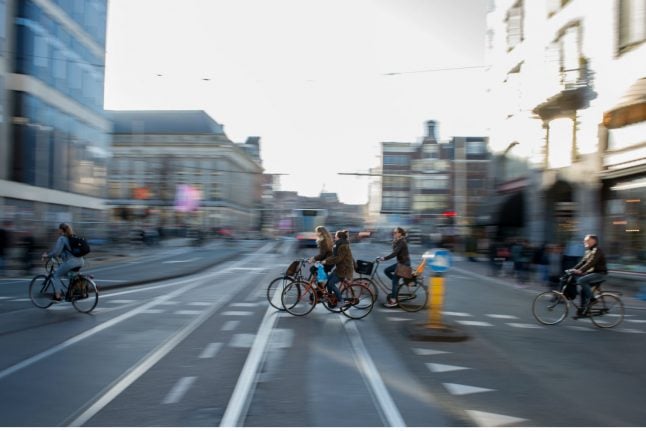 The environmental group complained in its report that Germany’s five biggest cities spend less than €5 per person per year on their cycle routes. That is much less than Europe's two cycle metropolises – Amsterdam and Copenhagen – which spend multiple times more on their bike infrastructure.

And that expenditure pays off in far fewer cycle deaths, Greenpeace argues. Cyclists are ten times more likely to die on the streets of Berlin, Hamburg and Stuttgart than they are on the roads of the Danish and Dutch capitals, the NGO found.

“The government needs to invest money so that people can cycle through the city more safely,” said Greenpeace transport researcher Marion Tiemann. She argued that more modern infrastructure could lead to 30 percent of commuters in major cities switching from four wheels to two, which would lead to measurable improvements in air quality.

The NGO also pointed to statistics on cyclists dying on Germany’s roads. Some 382 cyclists died in 2017, a number that has not significantly decreased in recent years.

In an age when ever more emphasis is placed on living in unison with our environment, few people would disagree with the conclusions of the report.

But there is another organization in Germany that says that the increasing numbers of cyclists on streets is proving to be a scourge for people who like to strip back transportation a stage further – pedestrians.

According to the Pedestrians Association, walkers' rights are routinely ignored by city planners even though it is indisputable that their preferred means of getting around is an environmentally friendly one.

“The cities are always giving cyclists special treatment due to the fact they have to meet EU standards on pollution and battle the noise from traffic – but this is often done at the cost of pedestrians,” the association’s spokesman Bernd Irrgang told The Local.

Cycle paths are often squeezing out pedestrian pavements, resulting in them being narrower than the legally required minimum, Irrgang asserts.

According to Irrgang, more money needs to be diverted to making street crossings safe for the old and vulnerable.

But it gets worse. “In Frankfurt the authorities are unofficially encouraged to ignore traffic offences by cyclists,” Irrgang claims. This is despite the fact that “rule breaking cyclists confuse and endanger old people, especially those who have trouble walking.”

“Bikes that are locked up where they shouldn’t be and cyclists who cycle on the pavement scare and intimidate walkers,” he adds.

Irrgang even believes that cyclists have it in for people who prefer foot power. “They build up frustration against cars and let it out on pedestrians.”

The Pedestrian Association is therefore proposing that bicycles be fitted with license plates.

“If people who use the roads are identifiable then they act in a more law abiding way,” Irrgang reasons. “Licence plates can be registered in a reasonably priced way either via an insurance company or through a bike shop.”

The idea of issuing licence plates for bicycles in Germany is in fact nothing new. But experts doubt whether it would be of any benefit in reducing errant behaviour.

“From my point of view a licence plate wouldn’t do anything to improve things,” accident researcher Siegfried Brockmann told Tagesspiegel in 2014.

Brockmann pointed out that cyclists could only be found culpable of a transport violation if it could be proved they were cycling the bike at the time.

But, as one does not need insurance to use a bike, the owner could always argue that someone else was using it at the time. For them to be held accountable, a bystander would have to take a picture of their face as they were riding.