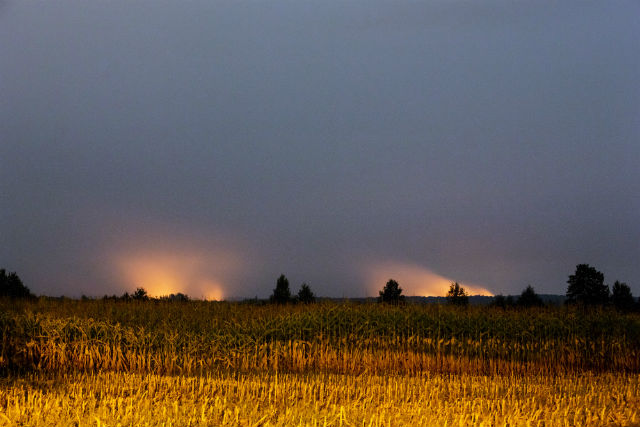 The forest fires between Treuenbrietzen and Jüterbog brighten up the night sky. (Recording with long exposure). Photo: Christoph Söder/dpa
“The situation has not yet calmed down,” a spokesman for the interior ministry of Brandenburg state told the DPA news agency.
Around 600 people fled their homes in three villages in Brandenburg 50 kilometres (30 miles) southwest of the capital late Thursday as firefighters battled the blaze from the air with water-bombing helicopters.
The smell of acrid smoke reached Berlin as more than 400 hectares (1,000 acres) of woodland burned outside the nearby city of Potsdam. Residents of one of the villages were able to return home late Friday, but those from the other two will not be able to do until Saturday.
However they would be allowed to briefly visit their homes to feed their animals, said local official Christian Stein.
“Our main goal remains to protect the evacuated areas from the flames,” Stein told DPA. “We haven't been able to push back the fire yet but no building has been affected.”
About 440 firefighters will be deployed to beat back the fire over the weekend, when no rain has been forecast and strong winds could increase the fire's intensity.
Efforts to contain the fire were complicated because the affected terrain is still littered with munitions from World War II, regional emergency response coordinator Michael Knape told public broadcaster RBB.
READ ALSO: Hundreds evacuated near Berlin as forest fires threaten villages
He called the situation “dramatic”, saying there had already been small explosions from ordnance buried in the ground.
An enduring drought and heatwave have left European rural areas particularly vulnerable to wildfires, which wrought devastation in Greece and Sweden earlier this summer.
As the flames came within 100 metres of one of the German villages, residents were told to take only the most essential belongings like medication and documents before fleeing.
Emergency hotline operators received hundreds of calls from residents of Berlin saying they could smell smoke.
“The entire urban area is now affected. The cause is the large fire in Brandenburg,” the Berlin fire brigade tweeted.