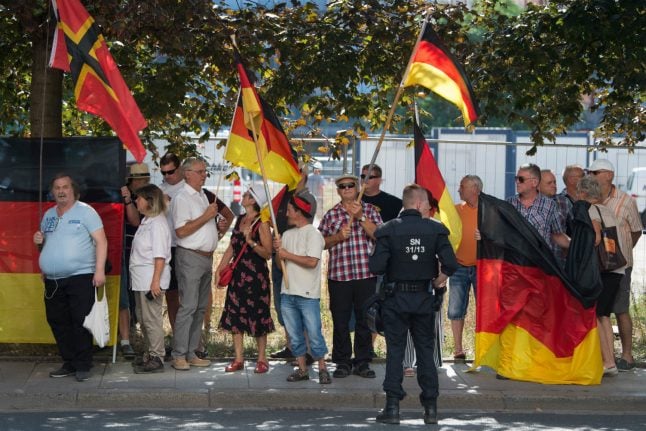 Last Thursday Angela Merkel visited Dresden to meet with politicians from her Christian Democrats (CDU) party in the Saxony state parliament. The Pegida movement, which was established in 2014 to protest against “the Islamization of the west” organized a protest against her visit.

Dresden is the spiritual home of Pegida and whenever Merkel visits she receives a hostile reception from a crowd of protesters who shout slogans such as “Merkel out!” or “traitor of the people.”

A camera crew from national broadcaster ZDF went to the Pegida demo to film it. They were in the middle of shouting footage when one man approached them from the crowd and aggressively ordered them to stop filming, claiming that they were committing a crime by filming his face.

Another protester then approached the crew and knocked the camera out of the cameraman's hand.

Police then get involved. But rather than help the journalists, they detained them and insisted on taking their press passes and personal documentation. The officers held the crew for around three quarters of an hour before letting them move on.

The TV journalist involved in the incident claimed it showed that the police were working on behalf of Pegida to impede the press in going about their work.

Police officers acted “like the executive arm of Pegida” the reporter claimed, adding that local journalists had reported being impeded by the police in a similar way.

The case became even more explosive on Wednesday when it emerged that the man who had demanded that the TV crew stop filming was an off-duty police officer. The man was using time off work to demonstrate, Saxony's interior ministry confirmed. Adding to the embarrassment for Saxon authorities, the officer was also ignorant of the law – contrary to his claim, journalists are allowed to film people taking part in demonstrations.

The eastern state of Saxony has long been dogged by a reputation as hotbed of far-right politics. The bombing of a mosque in Dresden in 2016 and the 2017 conviction of a terror cell who planned attacks on refugees are two high profile crimes which have cemented this reputation in recent years.

This also isn't the first time that the police there have been accused of favouring the anti-Islam Pegida group.

In 2016 Martin Duldig, leader of the Social Democratic Party (SPD) in Saxony, told Die Zeit “I ask myself if sympathies for Pegida and the AfD [Alternative for Germany] are more widespread in the police than among normal citizens.”

Duldig was commenting after video emerged of police officers dragging a terrified refugee from a bus in the town of Clausnitz while a mob of anti-refugees demonstrators blocked the vehicle.

State authroties lept to the defence of their police force this week, though.

State leader Michael Kretschmer (CDU) roundly rejected the accusation that police were attempting to subvert press freedom. He claimed that an internal investigation of the incident showed that the officers had acted properly.

“The only people in the video who seem to act seriously are the police,” he said in a now apparently deleted tweet.

“I wouldn’t say that we did everything correctly, perhaps they could have been five minutes faster,” he told broadcaster NDR. “But I don’t accept the claim that we were impeding press freedom and that we were doing the work of the protesters, that claim has absolutely no substance.”

Geither claimed that the journalists themselves had caused their long detention by repeatedly phoning their editorial team to ask for advise on their rights.

He also conceded that some of his officers support Pegida, saying that “the police is a cross-section of society. You’ll find every political persuasion here.”

For critics though, the fact that a member of the state police participated in a far-right rally and then harassed jouranlists requires much more serious examination from the state government.

“Whoever is responsible for protecting our constitution should have nothing to do with groups that fight against it, even in their free time,” said Cem Özdemir, former leader of the Green party.

Federal justice minister Katarina Barley got involved on Thursday, saying that “what happened in Saxony is really worrying and the authorities there need to investigate this urgently and comprehensively.”

“Freedom of the press is a vital aspect of our society and is protected by our constitution,” said the justice minister, who is also on the board of ZDF.