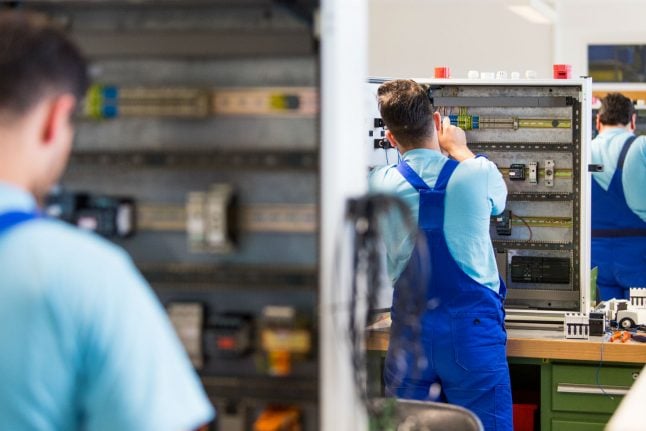 Refugees working as part of an apprenticeship at Siemens. Photo: DPA

It is one of the biggest challenges facing Germany today. How to integrate the hundreds of thousands of people who have came to the country seeking asylum in recent years?

Many believe that the most important thing is to get people into employment, and according to the latest figures, things are going pretty well in that regard.

“Everything is going well,” BA chairman Detlef Scheele told DPA. “These are positive numbers, particularly when you consider that we are talking about people who came here for humanitarian reasons, not necessarily to find work.”

The figures apply to those from any of the eight so-called “main asylum countries” (Afghanistan, Eritrea, Iraq, Iran, Nigeria, Pakistan, Somalia and Syria), from which Germany has received the highest numbers of people seeking asylum since 2016.

A vast majority of the 300,000 who have found work are in work covered by Germany’s social insurance system, Scheele said.

The positive figures were to a large extent down to an improvement in language skills, Scheele reported, saying that learning German was still the most important factor when it came to finding employment.

“We now have a lot more young refugees who have spent a longer time in mainstream German schools, and who therefore speak better German,” he said. Education figures were generally positive according to Scheele, with around 28,000 young refugees having completed an apprenticeship.

The BA chairman also praised the so-called “combo courses”, which allow refugees to learn language skills in tandem with their professional training.

Work to be done

23,000 newcomers have already benefited from such courses since 2016.

Yet Scheele also warned that there was still a lot of hard work to be done, and that patience was crucial when it came to getting newcomers into jobs.

“These figures don’t change the fact that a very large number of people have come to Germany,” he said. “It’s unrealistic to expect people to learn sufficient German in just one year.”