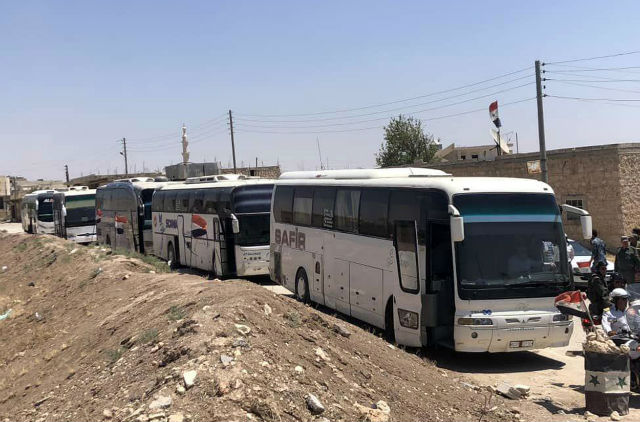 Al-Ice: This photo provided by the state-owned Syrian news agency SANA shows buses arriving to evacuate besieged villages between Idlib and Aleppo. Photo: Uncredited / SANA / AP / dpa
In a telephone call the two leaders described the “humanitarian risks” in Idlib, where government forces have stepped up their bombardments of rebel positions in recent days, as “very high”, according to the French presidency.
They also called for an “inclusive political process to allow lasting peace in the region”.
President Bashar al-Assad has set his sights on retaking control of the northwestern province of Idlib — the biggest area still in rebel hands after seven years of war. Last week, government helicopters dropped leaflets over towns in Idlib's east, urging people to surrender.
Idlib, which sits between Syria's Mediterranean coast and the second city Aleppo, has been a landing point for thousands of civilians and rebel fighters and their families as part of deals struck with the regime following successive government victories.
The United Nations has called for talks to avert “a civilian bloodbath” in the northern province, which borders Turkey.
Merkel and Macron also called for a “coordinated European solution” to migrant arrivals in the Mediterranean after another NGO rescue ship was left adrift this week before eventually being allowed dock in Malta.
After being turned away by Italy, the ship, which was carrying 141 people, was eventually given permission Tuesday to dock in Malta after five EU members — France, Germany, Spain, Portugal and Luxembourg — offered to take in the newcomers.
The agreement was the fifth of its kind between Western European governments since June when the new populist government in Italy — a main landing point for migrant boats bearing Africans across the water — began turning away NGO rescue vessels.
Italy accuses the NGO ships of encouraging smugglers to pack migrants into rickety boats, in the knowledge that they will be rescued.
Url copied to clipboard!