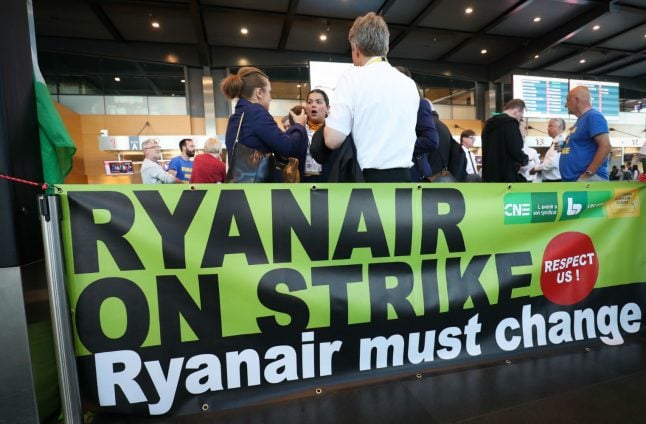 Why are the pilots striking?

The powerful pilots’ union Vereinigung Cockpit (VC) called the strikes after it said that its calls for talks on improved wages and fairer working conditions were ignored by the Irish airline.

VC has not specified what exactly its demands are, but has said that Ryanair was not even willing to talk about the areas in which it was prepared to negotiate.

Pilots are solidly behind the action. 96 percent of them voted to take industrial action.

“We are extremely sorry for the affected passengers. The responsibility lies with Ryanair management,” Cockpit president Martin Locher told a press conference on Wednesday.

The airline has described the strike as “unjustified”, claiming that the union ignored a revised offer sent at the start of August. Ryanair also claim that their pilots earn between 20 percent and 30 percent more than they would at rival no-frills carriers.

How do I know if the strike is affecting me?

The strike is taking place over a 24.hour period from 3am on Friday morning and will continue until 3am on Saturday.

Germany has been worst affected by the industrial action, which is also taking place in Ireland. Belgium and Sweden. The company announced on Wednesday that they have cancelled 250 flights to and from Germany. This means that roughly 42,000 people in Germany are affected by the strikes. According to the company, a total 400 of the scheduled 2,500 flights in Europe during the 24-hour period have been struck off.

If your flight has been cancelled you should already know about it. Ryanair state that they informed all people whose flights have been struck off on Wednesday via SMS and email.

Whether Ryanair can be completely trusted to inform customers on time is open to question though. During a strike in Italy at the end of July, many travellers turned up at the airport only to find out there that they couldn't fly.

Ryanair has not made a complete list of affected flights available to the press. If you have questions about your flight, you can call the company on 0180/667 78 88.

What compensation can I get?

Ryanair offers affected passengers a refund, a free transfer onto the next available flight or the option of being rerouted through another airport.

EU law states that airlines must offer an alternative means of reaching one’s destination. The airline is also obliged to provide passengers with accommodation if a cancellation meaning they must wait a day before flying.

It is also possible that passengers have the possibility of suing for more compensation, due to a ruling by the European Court of Justice in April.

According to Spiegel, the ruling opened up the possibility of travellers receiving compensation of between €250 and €600 if the strike is about working conditions.

“Passengers whose Ryanair flights are cancelled may have a claim to damages of up to €600 per person, providing the flight is cancelled within 14 days of its scheduled departure,” said Laura Kauczynski, an expert on passenger rights at the website AirHelp, also citing the European ruling.

However, these are still untested waters. Travellers should be aware that to obtain such compensation they would first need to take the company to court. Consumer rights groups advise people to apply for a refund from the company as a precautionary measure.

Should we expect more strikes?

The pilots union clearly seems to be digging in for a drawn out battle.

“In the coming weeks and months we will take industrial action repeatedly if we have to. These could also happened spontaneously,” a spokesman for VC said. The union have said though that they would give people at least 24 hours' notice.

VC proved during an industrial dispute with Lufthansa that they put up a good fight. Rolling strikes between 2014 and 2016 cost the company and estimated €351 million in lost revenue. Eventually VC secured a nine percent pay rise for its members.