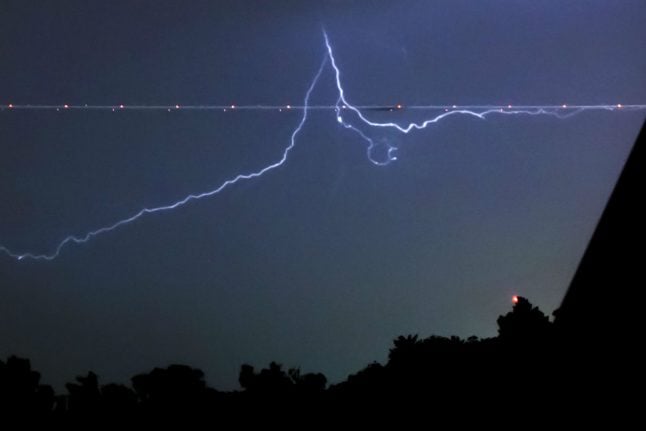 Storms over Frankfurt saw flights grind to a halt at the city's airport on Thursday. Photo: DPA

Frankfurt airport ground to a halt for a second time in a week on Thursday, as an approaching storm front forced authorities to suspend all flights.

All take-offs and landings were briefly suspended  on Thursday afternoon due to storms sweeping over Germany from the West.

Some planes stayed in the air until the storm had passed, a spokesperson for airport authorities said, adding that this was normal procedure in such weather conditions.

Activity on the ground was suspended due to the danger of lightning strikes on the airfield.

With the threat of flight cancellations looming over many passengers, Lufthansa moved swiftly to book up 3,000 hotel rooms. The airline estimated that around 40 flights and 6,000 passengers could be affected by the storms.

The Frankfurt fire service have also warned of severe winds in forest and parkland near and in the city.

The storm front which has been building over northern France could build into a hurricane which would reach Germany by Friday morning, Bild reported, with some models predicting winds of up to 150 km/h.

Meteorologist Dominik Jung from wetter.net told Bild that, even under more moderate predictions, the North Sea coast could see winds of 120 or 130 km/h, which would be classified as a hurricane on the Beaufort scale.

Storms are also set to hit the rest of the country, with the German Weather Service issuing warnings for North-Rhine Westphalia on Thursday.

“Streets could become flooded”, a DWD spokesperson said in Essen, and also warned of falling trees, hail and heavy rains.

Showers are predicted for the north and northwest at the weekend, as the long heatwave begins to abate in the coming days. While highs of 30 degrees will still be reached, the DWD said, there will not be another extended heatwave this summer.

On the border to Austria there is a chance that “extremely heavy, continuous rain” will fall on Saturday morning, the meteorologists predicted.

In the northeast of Germany, isolated, heavy thunderstorms are possible. The warnings come after fierce storms hit the Mediterranean and Austria on Friday, causing several deaths.

The German Weather Service (DWD) has issued an extreme weather warning for the south of Bavaria and parts of Baden-Württemberg. On the edge of the Alps, a severe weather warning is in effect until Saturday morning for deluges of up to 140 liters per square metre.

In other parts of Bavaria and the southwest of Baden-Württemberg, 50 to 80 litres per square metre of rain are possible, according to DWD.

The rainfall could lead to the flooding of cellars and streets, high water in streams and rivers, as well as landslides. Residents of the affected regions have been advised to close their windows and doors.

After weeks of drought and severe forest fires, DWD also predicted heavy thunderstorms with heavy rain in the east and northeast for Friday.

Isolated hailstorms and strong gusts of wind could also occur. In the evening, more showers and thunderstorms are expected to move in from the west and northwest.