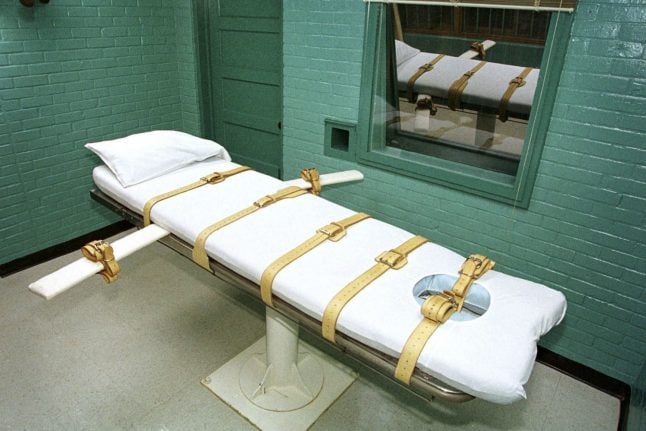 An execution cell in Texas in the year 2000. File photo: DPA

Fresenius Kabi filed the lawsuit Tuesday evening, saying the state was planning to use two of its drugs on August 14th to put to death convicted killer Carey Dean Moore.

Moore is sentenced to death for the 1979 murder of two taxi drivers. He is not contesting his execution order, but it could nevertheless be delayed by the lawsuit.

If carried out, the execution would be Nebraska's first in 21 years and its first ever lethal injection.

The state plans to use four drugs – the sedative Diazepam, the powerful narcotic painkiller fentanyl citrate, the muscle relaxer cisatracurium and potassium chloride, which stops the heart.

Fresenius Kabi believes it is the source of the latter two drugs and is asking a federal judge to issue an order either temporarily or permanently blocking the state from using the injectable medications.

“While Fresenius Kabi takes no position on capital punishment, Fresenius Kabi opposes the use of its products for this purpose and therefore does not sell certain drugs to correctional facilities,” the company said in its civil complaint.

“These drugs, if manufactured by Fresenius Kabi, could only have been obtained by defendants in contradiction and contravention of the distribution contracts the company has in place and therefore through improper or illegal means.”

The drug maker claims that with state executions regarded negatively among the majority of the European public, it could suffer “great reputational injury,” if its drugs are used for capital punishment.

The state of Nebraska has released limited information about the drugs and has not disclosed their source — reflecting a general dilemma for US states that continue to carry out the death penalty via lethal injection.

Injectable drugs have become harder to acquire amid public opposition and a reluctance — or outright hostility – among drug manufacturers to sell their products to prisons for use in executions.

“Nebraska's lethal injection drugs were purchased lawfully and pursuant to the State of Nebraska's duty to carry out lawful capital sentences,” the state attorney general's office said in a curt statement.