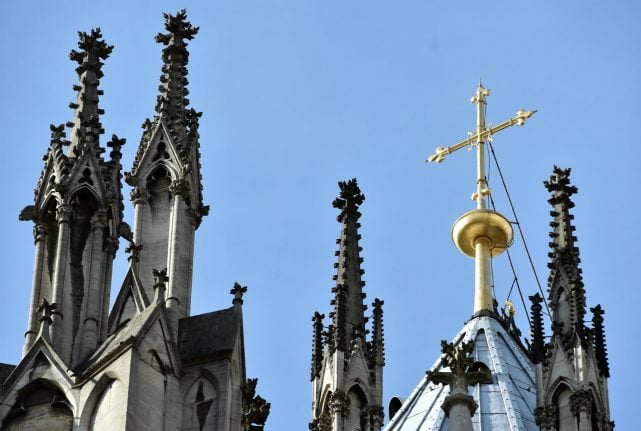 Leaving the Church can be a lengthy and complicated process in Germany. Photo: DPA

When Julia* arrived in Germany from Poland, she declared on her registration form (Anmeldungsformular) that she didn’t have a religion. Like so many lapsed Catholics, Julia was baptized as a baby but hasn’t been to church in years.

“I don’t identify with any church, so I answered this registration form question with total honesty,” says Julia.

Unfortunately for her, “lapsed” or “non-practicing” aren’t words that the German tax authorities understand. Unless you have formally disavowed your faith in Germany, you are still considered religious. And if you are still religious, you have to pay church tax.

Today Julia lives in limbo, not paying any church tax but still technically a member of the Catholic Church. She is worried that the authorities might catch her out and demand a whopping back payment.

What is church tax?

Church tax, or Kirchensteuer, is a tax that religious communities charge their members to finance their duties. When you register at your first address in Germany, you fill in a box stating your religion. Your local tax authority collects this tax and passes it onto the church while retaining a service fee.

Carsten Splitt, a spokesperson for the EKD, the federation of German Protestant churches, says that the tax covers most of the Church's costs.

Two-thirds of the EKD’s €12 billion in annual expenditure goes to services. “These are pre­dominantly personnel costs — an indicator that the work of the churches is to serve the people,” he says.

“The greatest proportion of the costs, €3.8 billion, is of course incurred in the areas of pastoral care, preaching and church community work in general.”

The second-highest cost is the diaconal ministry, which has an annual budget of €3.3 billion. “Diaconia refers to the social services provided by the Evangelical churches,” says Splitt.

This is where the Church’s role in German society differs from that of many other countries. Germany allows for charitable organizations to run many of the social services normally undertaken by the state. Both the Catholic Church and the Protestant Church run schools, child care facilities, elderly care homes, and more. While these services are financed partially by church members through the church tax, they are open for everyone to use.

“About 30,000 institutions are part of this [the Diakonie] um­brella organization including residential care and outpatient facilities such as care homes and hos­pitals, advice centres and community care cen­tres,” says Splitt.

“Nearly every seventh place in a childcare centre [in Germany] is provided by the Evangelical Church,” he continues. “And almost a third of all hospital beds maintained by independent, charitable providers are sponsored by Diakonie Deutschland.”

While many of these institutions are co-funded by individual payment for services. For example, a person's health insurance company may cover a place in an elderly care home. But it is worth noting the far-reaching benefits of the EKD’s diaconal ministry. Many of those who belong to the church — even those who have stopped regularly attending — see church tax as a way to give to charity.

Still, Germans and non-Germans alike are quitting their churches in droves, some tired of the extra tax each month, others following a global trend of dwindling attendance.

The extension of church tax to cover capital gains income in 2010 also left many older churchgoers concerned that the tax would eat into their retirement savings.

According to preliminary figures from the EKD, last year 367,504 people left either the Catholic or Protestant church. Every year since German reunification, somewhere between 200,000 and 550,000 people opted-out of a Christian church and its associated taxes.

Thankfully for the church coffers, increasing incomes mean that, despite the high number of opt-outs, churches are still earning more than ever before. Trapped in the church

After living in Germany for three or four years without paying church tax, Julia heard that some other Poles had received bills from the tax office, claiming years of unpaid tax. The authorities had discovered that they still belonged to the Catholic Church in Poland.

“They had been ‘found out' for being registered with the church in Poland, despite not believing or going to church,” she says. “I got really scared that it would happen to me too.”

In a similar case 2015, a Frenchman was forced to back pay hundreds of euros after the Berlin Catholic diocese contacted his hometown’s diocese and confirmed he had been baptized. This case proved that church administrators were communicating with churches in other countries and reporting back to the German tax authorities.

Julia thought all she needed to do was leave the church in Poland, so that if the German authorities discovered her religious status, the Catholic Church in Poland would confirm she was no longer a member. But getting that confirmation proved to be too difficult.

First she asked her mother to support her application as a witness. “Even though she doesn’t go to church herself, it’s still very much part of her identity and part of belonging to certain cultural circles,” she says. “For her it was really sad to think that I would want to abandon that, so she refused.”

Even when Julia found some other witnesses, the Catholic Church in Poland refused to let her leave, explaining that they couldn’t let her go as they believed she was still living according to Christian values. “They wrote that I showed humanitarian care by volunteering with refugees.”

Julia says she isn’t sure how the church found out about her good deeds, but evidence of her work was most likely visible on her Facebook page. “That was a slap in the face.”

As it turns out, Julia’s attempt to quit the church in Poland may have been unnecessary – it would have been sufficient for her to leave the church within Germany. But doing so came with its own risks.

How to stop paying church tax

If you are new to Germany, and haven’t yet registered, then you can simply tick “no religion” on your registration form (Anmeldung) on arrival.

Tax Advisor Assistant at WW+KN Steuerberatungsgesellschaft Nicole Beattie-Budig says, “if you are currently paying church tax and you want to stop, you don’t go to the church. You go to the local authority wherever you are registered.”

You can also opt-out by formally disavowing your faith (called Kirchenaustritt) at a local registration office. Each state (Bundesland) carries this out differently and requires a fee (usually around €30).

Once you have received confirmation that you are no longer required to pay church tax, Beattie-Budig recommends advising your employer of the change in order to avoid any delays or overpayments.

If you’ve formally left the church, but want to take communion or sing some hymns at Christmas, no priest is going to ask for your tax statement. But there are a couple of things you are no longer entitled to do once you leave the church.

“If a person decides to leave church, he or she can nevertheless benefit from an  Evangelical hospital or any other institution of the church,” says Splitt at the EKD. “Restrictions only affect certain Christian concerns like becoming godparents or marrying in a church. Also, specific employments within the church require membership.”

It was only recently that Julia found out it would have been enough to simply quit the church from within Germany. But after many years without paying church tax, she is concerned that if she declares herself “no longer religious”, the Finanzamt could accuse her of having lied on her original registration form. “I could be shooting myself in the foot.”

Rosamund Mather, originally from the UK but now living in Berlin, received probing letters from the taxman.

“When I did my initial Anmeldung,” says Mather, “I put ‘no religion’. About one year later, maybe less, I got an ‘are you sure?’ letter. I ignored it, and then a few weeks later got another one.”

Mather had been baptized in the Anglican Church in England. “I haven't been in about 10 years,” she says, “but you don't formally leave the church [in the UK], you just stop going!”

This discrepancy – between needing a formal confirmation of your exit in Germany, and simply stopping attending church in many other countries – is at the root of so many expats’ church tax headaches.

After doing some research, Mather decided to formally leave the church in Germany as a precaution. She headed along to the Amtsgericht Schöneberg with her passport, paid her €30 fee, and received her Kirchenaustritt confirmation.

“In my case, it triggered some difficult feelings regarding my religious past and its ties to my family,” says Mather. “My dad is a priest and, while he respected my decision, it wasn't a pleasant wound to have to open.”

By taking administrative action to formally repeal her faith, Mather was forced to relive an uncomfortable experience she felt she’d already dealt with, out of the fear of being found out and taxed.

The irony of paying €30 to confirm something she had already declared on her initial registration form is not lost on Mather. “Applying German standards to the complicated matter of faith and religion is just absurd – and expensive – in this day and age,” she says.

As long as the church and state continue to be enmeshed in Germany, migrants with religious ties – lapsed or otherwise – will have to carefully square their religious status with German expectations.

*Not her real name