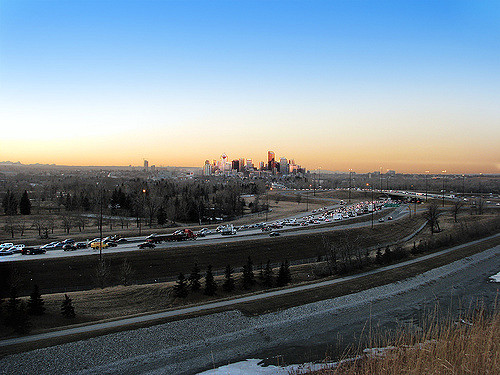 The 60-year-old German man was traveling with his family along a highway about 60 kilometers (37 miles) west of Calgary, Alberta en route to Banff National Park just before noon local time on Thursday when he was shot.

This caused his truck to swerve into a ditch and hit a tree.

The man was airlifted to a Calgary hospital and underwent surgery to remove the bullet that penetrated his skull.

Three members of his family with him were treated for minor injuries sustained in the crash.

Germany's foreign ministry said in a statement that it was “aware of the incident.”

It said the victim “is not in danger of death” while adding that it has reached out to offer support to his relatives.

Canadian police suspect this was “an aggravated road rage incident” involving a small back sedan that passed the victim's truck on the two-lane road as the shot rang out.

On Friday they announced they had detained a man and seized a vehicle believed to be linked to the shooting of the German tourist.

The black Chrysler Sebring matched the description of a vehicle involved in Thursday’s bizarre shooting on Canada's Highway 1A.

Authorities are also asking for a possible witness in a passing RV (recreational vehicle) to contact them.

The driver of an RV being sought as a witness was headed in the opposite direction and stopped at the crash but departed soon after calling emergency services.

More officers, a canine unit and an RCMP forensic team, meanwhile, have joined the manhunt for the suspect.