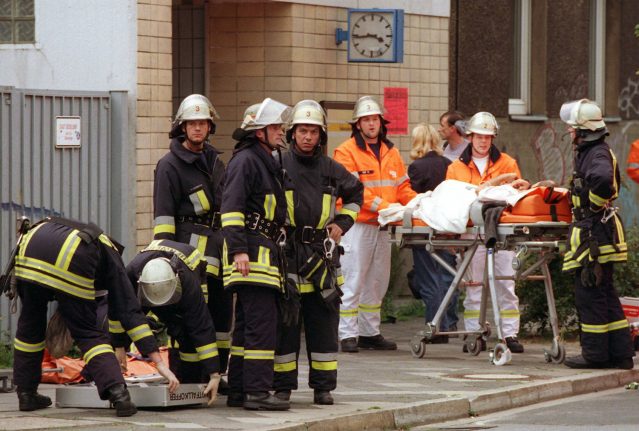 The aftermath of the attack in 2000. Photo: DPA

Ralf Spies, 52, was cleared of 12 counts of attempted murder with a “racist” motive and a charge of causing an explosion in the attack at a commuter rail station in the western city of Düsseldorf on July 27, 2000.

The regional court in the city found him not guilty, after having released him from custody in May “for lack of sufficiently reliable testimony” from witnesses, many of whom were in prison with the defendant.

Senior judge Rainer Drees said in his ruling that witness testimonies had been contradictory and that the evidence was sparse.

The court followed the advice of the defence team which had called for an acquittal, saying that the witness testimony was not credible and that no trace of the defendant’s DNA had been found at the scene of the crime.

The victims were on their way back from a German language course when the explosive, hung in a plastic bag on a fence near the Wehrhahn station entrance, went off, sparking panic.

Ten eastern European migrants – six of them Jews from the former Soviet Union – were injured in the bombing, which shocked Germany and drew international condemnation.

A 26-year-old Ukrainian pregnant woman lost her unborn child and had to undergo emergency surgery after the blast ripped off one of her feet.

Her 28-year-old husband suffered wounds over his entire body from metal fragments unleashed in the explosion and was in a critical condition for several days.

Chief prosecutor Ralf Herrenbrück, who had called for a life sentence for Spies, expressed outrage in closing arguments last week that the case appeared to be unravelling.

Spies “felt called upon to keep his neighbourhood 'clean'. He wanted to get rid of everything he hated,” Herrenbrück told the court.

Four lawyers representing victims of the blast pointed to wiretapped telephone calls in which Spies appeared to boast about his involvement in the attack.

They had urged presiding judge Rainer Drees to convict Spies, citing a preponderance of evidence.

But as it became clear that the trial was heading toward an acquittal, co-plaintiff attorney Juri Rogner said in final arguments that the court was on the verge of “committing the worst legal mistake in the history of Düsseldorf”.

The defendant was known to police as a right-wing extremist and ran a military surplus store near the scene of the crime.

Investigators say the former soldier has a swastika and a well-known Nazi fortress tattooed on his body.

Spies told the court at the start of the trial that he had not carried out the bombing and didn't know who had.

“I was definitely not at the scene of the crime at the time it happened,” he said.

Düsseldorf police had questioned Spies and placed him under surveillance soon after the bombing before determining they did not have enough evidence to arrest him.

The investigation, long dormant, was only revived in 2011, after a series of 10 murders by a band of neo-Nazis known as the National Socialist Underground (NSU).

While no link was established between the NSU's killings and the Düsseldorf bombing, they spurred investigators to take the extremist threat more seriously.

The NSU's sole surviving member, Beate Zschaepe, was sentenced to life in prison earlier this month by a court in Munich.

An apparent breakthrough in the Düsseldorf case came in June 2014 when a prison inmate told police that Spies – who was briefly in jail over an unrelated offence – had “bragged” about masterminding the attack, using an anti-immigrant racial slur.

Police resumed the investigation and in February 2017, after Spies's release from prison, swooped on his home and took him into custody. He was charged in December.

The court heard that Spies had told a cellmate that the death of the unborn baby in the attack was a case of “successful euthanasia”.

“He saw himself as a hero, as a soldier for Germany who had to save the honour of this country,” the cellmate identified only as Holger P. said.

And an ex-girlfriend of Spies told investigators that she saw in his kitchen a homemade pipe bomb, constructed using the explosives from up to six military-issue hand grenades.

Herrenbrueck said Spies set off the device using a remote-controlled detonator and that it was only because the TNT inside was impure that no one had died in the blast.

However during the trial, several witnesses backed away from their previous testimonies.

Defence attorneys said that the prison inmates who gave evidence may have been promised lighter sentences in exchange, undermining their credibility.