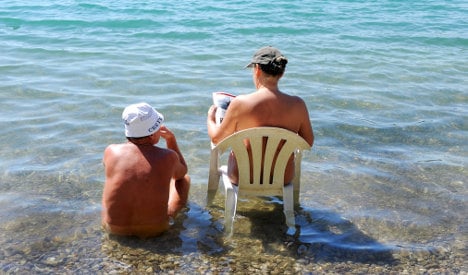 Where exactly does the Teutonic tolerance for public nudity end? Are you allowed to let the sun in on the places it normally doesn’t shine will lying on your balcony or in the garden? Could you even visit your local supermarket while completely billy bollocks?

There is actually no law that explicitly bans public nudity, Spiegel's youth magazine Bento helpfully informs us. In other words, nakedness is theoretically legal everywhere.

But before you go and unhook your bra or pull down your boxer shorts and run off down your local Hauptstraße whooping for joy, you should be aware of a couple of hitches. While public nudity is not illegal, it can be an Ordnungswidrígkeit – meaning those “order officials” from the Ordnungsamt have the power to punish you if they feel that your nudity is disturbing other people.

Normally the Ordnungsamt will simply tell you to leave the area and pursue your passion for Freie Körper Kultur (FKK) elsewhere. But they are also within their rights to impose a fine of up to €1,000.

So where are the Ordnungsamt likely to get involved and where not?

Within the four walls of your own zu Hause, you can be as naked as you want. And this also generally applies to your balcony and your garden, legal advice platform anwaltauskunft.de explains.

Even people who like to exercise naked in the garden are likely to find themselves on the right side of the law, thanks to a legal case from 2005. At that time a woman whose “libertine sunbathing” caused consternation among her village neighbours was found by a court in Saarland to be doing nothing wrong.

At the same time, anwaltauskunft.de notes, anyone who sunbathes naked has to accept that neighbours can gawp at them for as long as they want. The nosey neighbour would only be breaking the law if they spied on you through a window.

Sunning yourself naked on the balcony is also generally okay as long as the balcony is not particularly exposed. You might be advised though to invest in some form of privacy shield just to be on the safe side.

If you are thinking about going skinny dipping, you should be aware that there are designated FKK areas at many lakes. While nakedness is encouraged at FKK beaches, you are actually allowed to be naked at any beach or lakeside swimming spot. You are also likely to notice a distinct difference between the east and the west of the country on this issue. East Germans are very liberal about stripping off at waterfront and the FKK areas are barely distinguishable from other beaches. But Wessis are a bit more prudish and are unlikely to take their clothes off outside the designated areas.

Anyone brave enough to go out for a hike under the blazing sun of the current heatwave should also rest assured that they are allowed to do so in nothing but a study pair of walking boots. Hills and forests generally count as too isolated for fully clothed walkers to have any complaints about the wardrobe choices of fellow hikers.

While nakedness is fine far from the city bustle, different rules apply in the inner city. If you walk naked down your local high street you are likely to have the Ordnungsamt on your back before too long. Even here though, there are some exceptions. Munich and Hamburg have both had FKK areas in inner city parks for the better part of a century. You can normally find information on nearby FKK areas on your district's official website.

Last but not least, German legal experts are in agreement that it is fine to drive your car naked – but with one condition: you still need to be in control of the vehicle. So it may be a good idea to wear at least a pair of shoes to ensure your foot doesn't slip from the brake in case of an emergency.