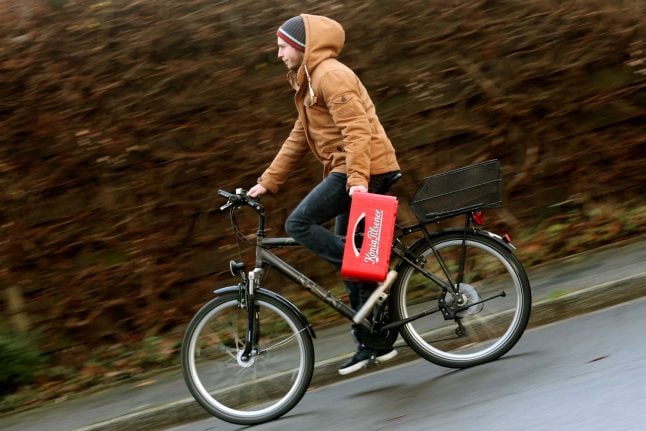 Committing a seemingly-innocent offense could land you in big trouble in Germany. Photo: DPA

1. Crossing the road when there is a red light

It's illegal to cross the road during a red light and offenders could face a fine and the icy glare of onlookers. Photo: DPA

Defying the Ampelmännchen is a criminal offense in Germany and could cost the unruly expat a fine and a scold from disapproving onlookers. Even in quiet suburban areas with no cars in sight, Germans – as a matter of principle – patiently wait for the little traffic-light man to turn green before crossing the road.

Consequently, expats running to work late but wary of breaking the most important unwritten rule will find themselves in an unenviable Catch-22. They can either make a quick dash across the road during a red light or abide by the law and turn up to work late. Whatever they decide, they will have made a grave transgression.

On the topic of road etiquette, expats should be careful not to mistake the pedestrian path for the bike lane, or else find themselves dodging for their lives as passing cyclists aggressively ring their bell and hurl abuse at them.

2. Riding a bike while drunk

Biking and boozing are popular pastimes in Germany, but together, are a dangerous combination.

Two German passions – biking and beer – should never mix. Expats won over by the cycling craze should avoid biking home after a boozy bash or risk ending the night in a police station. If their blood alcohol level exceeds 1.6 per mil, they could be fined €1,000 and have their driving license confiscated or even revoked.

The authorities regards drunk cyclists as a danger to themselves and the public’s safety. In 2013, a study by Auto Club Europe (ACE) found that 3,400 bike accidents which caused injury to others involved an intoxicated biker. Recently, transport associations have increased pressure on parliament to take harsher measures against this very German misdemeanor.

Drummers must put away their drum kits during 'Ruhezeit' to keep the neighbourly peace. Photo: DPA

Expats mowing the lawn, vacuum cleaning, or partying at certain times of the day risk the wrath of their neighbour and even a fine from their local police officer. To keep the peace with their neighbours, expats should observe quiet time.

‘Ruhezeit’ – reminiscent of boarding school curfews – differs from state to state, but takes place most commonly from 1pm to 3pm, 10pm to 7am, and all-day on Sunday.

Expats testing their new drum kit during these times shouldn’t be surprised if their landlord decides to kick them out, as German civil law regards disturbing the domestic peace as reasonable grounds for terminating a lease without notice.

4. Forgetting to buy a train ticket Unlike the New York subway, the London Tube, and the Paris Metro, there are no turnstiles or checkpoints in the Berlin U-Bahn. Using public transport, along with many services in this smooth-functioning liberal state, relies on trusting citizens to act for the common good, even if their obligations to one another aren’t enforced.

However, without metal gates to prompt newcomers to buy a ticket, committing a crime on Berlin’s transport might involve less cunning and calculation, and more carelessness. Bleary-eyed expats travelling to work could face a hefty fine if they unwittingly board without a ticket and are caught by inspectors, disguised in plain clothes.

Tenants bound to a contract should be careful not to break it. Photo: DPA

Germans take contracts seriously. Landlords here, in particular, expect tenants to follow the contract to the umlaut. Failing to read the jargonistic fine print of their rental agreement could lead expats to inadvertently break the contract and land themselves in trouble.

One common reason for breaking a contract is terminating the lease without proper notice. Most landlords require three months’ notice, so expats planning to move from one apartment to the next could find themselves at the mercy of a pedantic landlord threatening legal action and suing for rent until the end of the contract. Landlords also require termination notices for residential leases in writing, ideally on parchment paper and secured with a wax seal.