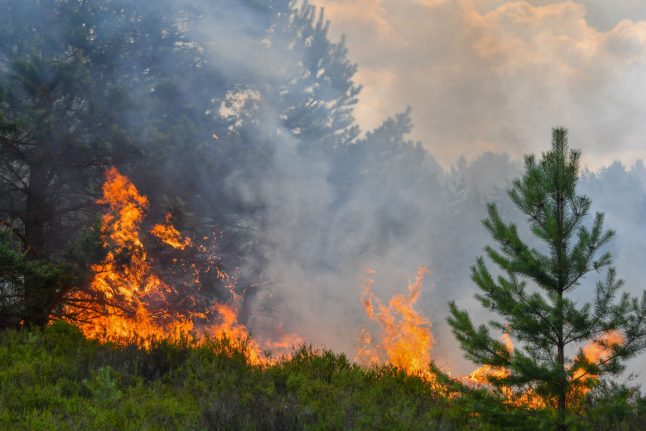 A small fire broke out in Lieberose in south Brandenburg on July 9th. Photo: DPA

What is now considered an usually warm summer in Germany, could be a completely average summer in around 30 years, according to the Potsdam Institute for Climate Impact Research (PIK).

Because of a higher base temperature, heat waves such as the one this week are now even more extreme, he says.

Amid shocking reports of quickly-spreading forest fires in Greece and Sweden this week, there are fears that the hot temperatures could see similar fires hit parts of Germany.

“The risk of forest fires in Germany is extremely high, and we urgently need rain to reduce it,” said Hartmut Ziebs, president of the German Fire Brigade Association (DFV), told DPA.

Smaller forest and field fires occurred in Saxony-Anhalt and Thuringia on Wednesday, due to extreme dry temperatures. On Monday, an agricultural field near Frankfurt am Main also caught on fire in response to the heat. Just one small square of wheat remained after a fire struck a wheat field in Eschborn in Hessen on Monday. Photo: DPA

Yet preventative measures for the protection and observation of the forests, said Ziebs, mean that Germany is unlikely to see fires as devastating as those in Greece and Sweden.

Members of the public can also help to lower the risk of forest fires, Ziebs said, by avoiding barbecues, campfires and smoking in the forest, all of which are in any case illegal by law.

Ziebs claimed that, while there was no shortage in firefighters, there is a small shortage of extinguishing capacity from the air. But, he added, “We'll get it done with the helicopters we have,” he said.

Furthermore deciduous trees, which do not catch fire easily, are often planted along railway lines in order to delay the spread of fires in the event of a spark, said Astrid Uhlmann, head of the Forest and Wood Division at the Federal Agency for Agriculture and Food.

For years, added Uhlmann, the German states with a high risk of forest fires have set up video cameras throughout the forest in order to have comprehensive surveillance, making sure that fire locations could be quickly pinpointed.

Regions with a higher risk of forest fires are Brandenburg, Mecklenburg-Western Pomerania, the Lüneburg Heath and parts of Saxony and Saxony-Anhalt. In these places, there are many pines and the soils are sandy and dry.

On July 5th, firefighters worked to quickly extinguish a fire that broke out in Helmstedt. Photo: DPA

According to Uhlmann, the biggest forest fire since the end of the Second World War occurred in the Lüneburg Heath in the summer of 1975. There, 8000 hectares of forest burned to the ground, and five firemen died.