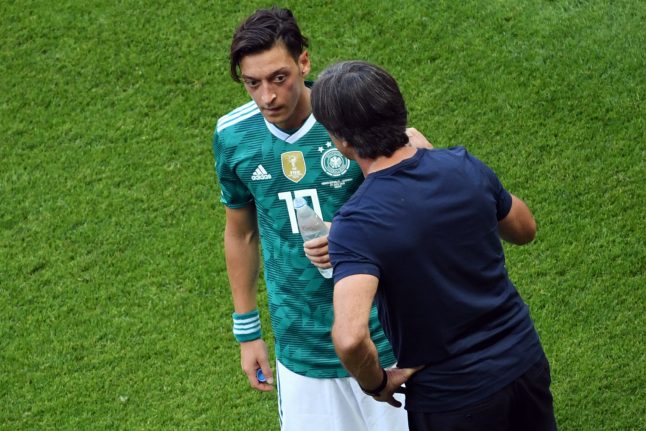 Mezut Özil on the pitch with Germany trainer Joachim Löw during the Germany-South Korea match at the 2018 World Cup. Picture: DPA

Professor Ansgar Thiel, Director of the Institute of Sports Science at the University of Tübingen, told The Local the footballing world should be “reflective” and think about “what went wrong” in the wake of Özil's statement on Sunday.

Thiel told The Local on Monday that sport stars should receive training on how to deal with political matters outside of football.

“Most people agree that Erdogan, from a democratic perspective, shouldn’t be supported but at the same time we have soccer players who don’t do anything else except play soccer 24/7,” he said.

“The DFB will have to think about how they coach their players not only in sporting aspects when talking to the media, but in regards to political aspects. I think that’s one of the most important things.”

Thiel, a professor of sport sociology said lessons must be learned on all sides in the sporting world.

The sociologist conducted a study last year with his colleague Klaus Seiberth, which asked how young international players of Turkish origin identify in Germany with the country they grew up in.

The series of 10 case studies of top junior footballers born in Germany and with a migrant background appeared in the Journal of Ethnic and Migration Studies. The respondents, who were between the ages of 15 and 21, had already played for a youth national team and felt equally connected to Germany and Turkey, the homeland of their ancestors.

Thiel said: “I think from my perspective in the current case of Özil, I would say it’s really difficult for them (footballers) to be aware of the political or public risks when saying something political.

“One of our main conclusions is that footballers are 24/7 athletes. Their whole lives have been spent playing football – that’s 10/15 years which have been focused on elite sport only. Everything is about football. Therefore politics does not play a very big role in their lives.”

The professor commented on the way the media in Germany talked about Özil and said he understood where he is coming from.

“If you read English reports about Arsenal they always say the German international or the German player. If you take a look at the German newspapers he's always called the German Turk. Özil repeated over and over again that he has a strong bind to Germany.

“Why isn't it the same for Lucas Podolski, who has Polish ancestors? So I understand his criticism. It's not really the same behaviour towards this group (German/Turkish). I think that's what he noted.”

Thiel said he believed Özil spoke out now to create an international discussion.

He said: “I think Özil was really disappointed by the reactions of the DFB, the German Football Association.

“Also he was disappointed by the media reaction and reaction from so-called fans. If you take a look at the public online discussions there really is a lot of hatred. Özil, from his perspective, did a lot for German football.

“He was one of the most creative players from the team and a lot of success of the team depended on him.

“From his perspective he finds the entire process very unjust and not really deserved.”

Going forward, Thiel said German football can recover but it must take stock of the situation.

He said many in the German FA would be “very reflective” at this time.

“I think they will reflect on this phenomenon and they will think about what we have to keep in mind when we’re talking about integration and ask what went wrong?,” he said.