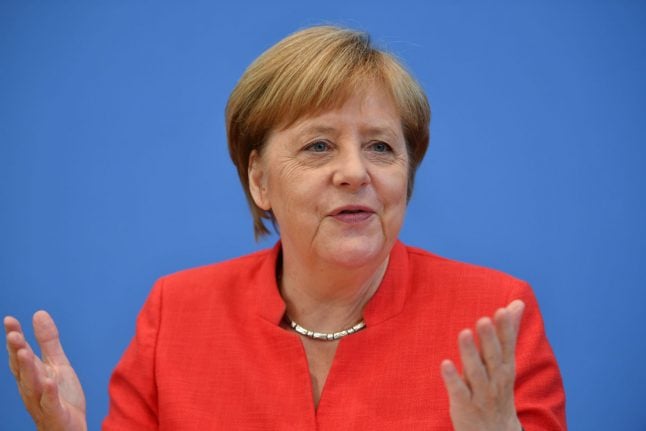 “That talks are held is basically good for all, in particular between these two countries,” Merkel said at her regular summer press conference.

“I find that meetings between the US and Russian presidents must return to normality,” she said.

Trump is planning to host Putin for talks in Washington later this year, after a first bilateral meeting in Helsinki on Monday.

Trump has come under fire following the Helsinki talks for what many saw as his unsettling embrace of the Russian strongman – and his seeming disavowal of his own intelligence agencies and their assessment that Moscow meddled in the 2016 election.

The talks in the Finnish capital were closed-door and with no one else present but interpreters.

Putin was last invited to the White House in 2005 by then-president George W. Bush, while former Russian president Dmitry Medvedev visited in 2010.

Pressed by reporters on how she viewed her relationship with Trump in light of his repeated criticism of Germany's asylum policies, defence spending and trade surpluses, a diplomatic Merkel stressed the importance of transatlantic cooperation.

Ties at the moment are “under strong pressure”, she acknowledged.

“Nevertheless the transatlantic working relationship, also with the US president, is central to us and I will continue to maintain it.”

She also expressed hope that a trade war with the US could be staved off, ahead of European Commission chief Jean-Claude Juncker's visit to Washington next week to try and negotiate a solution.

Merkel said the European Union was “ready” to respond if Trump makes good on his threat to slap steep tariffs on foreign cars, a move that would hit Germany's auto industry particularly hard.

But tit-for-tat retaliation would be “by far the worst-possible solution”, Merkel warned, describing the current trade tensions as “very serious”.

The potential car tariffs would not just violate the rules of the World Trade Organization, she added, but could also “endanger the prosperity of many people around the world”.