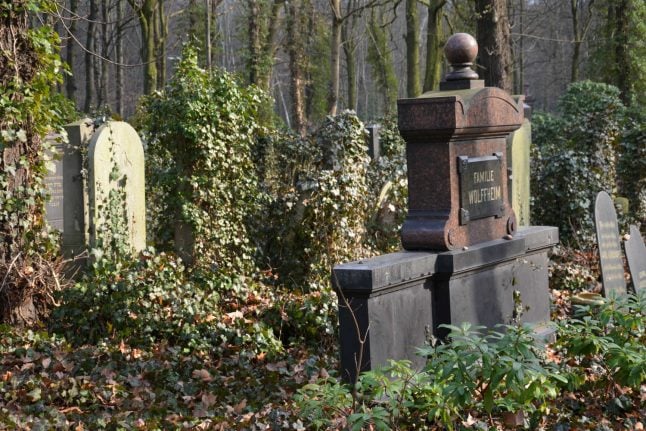 We all die. That is the one almighty truth which we carry through life. But once we've kicked the bucket and have taken up residence six feet under, our contribution to the living doesn't necessary fade with us.

A visit to some of Germany's cemeteries and resting places can uncover plenty of secrets from beyond the grave which tell an interesting story of the nation's past, present and future.

Take a wander round the numerous cemeteries in the capital and you’ll very quickly stumble across the wealth of literary, philosophical and artistic greats who called Germany their home. In Berlin alone you’ll find two sets of brothers who revolutionized German thought, science and linguistics.

Buried near Schloss Tegel in the Reinickendorf district of Berlin are Alexander and Wilhelm von Humboldt, perhaps two of the greatest thinkers of the 19th century.

Wilhelm was a philosopher, diplomat and linguist. His concept for an updated academic education which sought an holistic combination of research and studies fusing together the arts and sciences is still implemented today and forms the basis of the US and Japanese university systems.

Younger brother Alexander von Humboldt’s work on botanical geography and geophysical measurement paved the way to the foundation of the field of biogeography and modern geomagnetic and meteorological monitoring.

He also spent a long period of time exploring Latin America and was the first person to describe the continent from a modern scientific perspective.

A statue of Alexander von Humboldt outside the university named in his honour. Photo:DPA

Just 15 kilometres away another set of legendary brothers are buried: Jacob and Wilhelm Grimm – the Grimm Brothers. Born just a year apart in the mid 1780s, their linguistic field work and collection of folktales from all across German-speaking regions have given them permanent residency in the collective cultural psyche and has given them life after death.

To continue Germany’s strong literary foundations in its capital, you’ll find the graves of Theodor Fontane and Bertolt Brecht in the city centre.

In Weimar you can discover the friendship between two literary giants that has stretched from life into death; the coffins of Goethe and Schiller lie peacefully side by side. Unfortunately, this epic display of eternal friendship isn't quite as poetic as it initially seems – Schiller's coffin was emptied after modern testing discovered the remains didn't belong to him.

Within just an hour and a half, you can visit the graves of the man who revolutionized Christianity across Europe and the man who famously said: “God is dead”.

But Martin Luther and Friedrich Nietzsche are just a reminder that what we achieve in our lifetimes: our philosophies, stories and actions, form our essence which is kept alive through history, while our bodies will rot and become food for worms whether we did good or bad; our decomposing bodies signify our human equality.

There are a number of eerie things about German cemeteries, not least the occasional bullet marks engraved deep into a tombstone like an epilogue to the epitaph. War and Germany are two words which definitely share a troubling history and graveyards are one place this comes to light.

During the Second World War, Germany suffered heavy bombing from the allied forces. This bombing not only took the lives of many living and breathing German citizens, but the rest places of the German dead were also destroyed; entire cemeteries lay in ruins never to be put back together. When the Soviets arrived in Germany, the active battle on the city streets resulted in more damage to the tombstones.

The Berlin Wall cut directly through one Berlin cemetery. Photo:DPA

But this isn’t the only war Germany’s graveyards hold in their memories. In 1961 the Soviets erected a wall to separate East and West Berlin. Families were divided and so were the dead. The Wall cut directly through a number of pre-existing cemeteries.

The Second Sophia Cemetery and the small St. Elizabeth Cemetery across the road were two victims of the Wall. Part of each cemetery was trapped, isolated in No Man’s Land.

During the first years of the Wall, visitors from the West could apply for special permission to visit the graves on the eastern side on Sundays and national holidays. The popular tombstone inscription R.I.P., or Rest in Peace, could be seen by many at this time to be disrespected. The stranded graves on the other side of the Wall weren't resting in peace, they had become pawns in a icy game of politics, border control and contrasting ideologies. The Soviets later decided to dig up the buried remains and give them to the West for reburial.

A section of the Wall that cut through the grounds of the Sophia Cemetery as part of the “perimeter defences” was listed as an historical monument in 2001 and still stands amongst the dead.

Are cemeteries a dying business?

Outside of Germany we love to think of the Germans as punctual, organized and efficient beings of a completely different species. And while not all Germans will live up to these expectations, it is true that regulation of life – and death – is of great importance. Coffins piled up in a crematorium. Photo:DPA

The cost of dying in German is one of the highest in the world. The grim reaper doesn't demand cash on departure but the funeral and burial are pretty pricey. Throughout Germany a funeral is required by law. Even if you wish to be cremated, your ashes still have to be buried at an official burial site. This just seems so illogical for such an efficient nation.

What is more, the demand on burial sites has been growing over the years and with it the costs involved. Burial plots are rented – not bought outright – the lease of which is usually around 15 to 30 years. After this your loved ones must renew the lease or else you’ll be dug up and dumped somewhere else in a deeper grave.

This isn’t too illogical. After 15 years, most of the decomposing has been done and there isn’t much left of you anyway. But, in the past few decades a problem has threatened the efficiency, or inefficiency, of this method. When remains have been dug up after 15 years to be relocated, instead of a bag of bones, scientists have been shocked to discover wax-like corpses, which look as if they were only buried a few weeks ago. Some blame unfavourable soil conditions, others have speculated that our modern processed diets or anti-ageing products used in our lifetime could be delaying the effects of decomposition.

This discovery has led to tightened German burial laws to specified sites to ensure the decomposition progress can be monitored and other soil isn’t contaminated. But with more and more people choosing cremation over burial to keep costs down, regional authorities are feeling the pressure to allow mourners to spread the remains of their loved ones in other areas.

Bremen is the first German state to allow ashes to be spread in private gardens (but you’ll need to get a special permit first). Is our future under this tree? Photo:DPA

Another trend in Germany at the moment is to be buried in a decomposable sack and buried beneath a tree, or a tree seedling, so as to spend the afterlife as soil fertiliser for a living organism.

The special burial capsules are a lot cheaper than coffins. With the growing popularity of this option, burial forests are popping up throughout Germany, which are – of course – the only other places you are legally allowed to be buried outside a graveyard.

This is freeing up space in cemeteries, but instead of rendering them desolate haunting grounds something more unusual is happening.

Graveyards are changing the way Germans feel about death

For a long time Germans have tried not to think about death. Their country’s 20th century history is so tainted by the mass murder and bloodshed that it can be hard to engage with the concept of death and “passing on” in a more positive light. As the German writer Bernhard Schlink told the Guardian in 2012: being German is a “huge burden”.

But slowly Germans are engaging more with death. A family member or close friend no longer needs to be wrapped up and buried away before you have time to ponder what death, and life, really mean.

Having fun in the middle of Karlsruhe's main cemetery. Photo:DPA

This societal change has happened as more and more cemeteries are being repurposed for living alongside the dead. With fewer people seeking to be buried, cemeteries have gone through a drastic makeover, with the inclusion of children’s playgrounds, picnic areas, jungle gyms and even jazz cafes.

The change in attitudes towards death has fostered a new community spirit amongst the living. The old cemeteries have become the meeting spot for child day-care centres, language lessons for refugees and communal gardens.

The occasional tombstone is a reminder of those who have left this world but also allows their memories to go on living, their last physical remnants surrounded by joy and company.